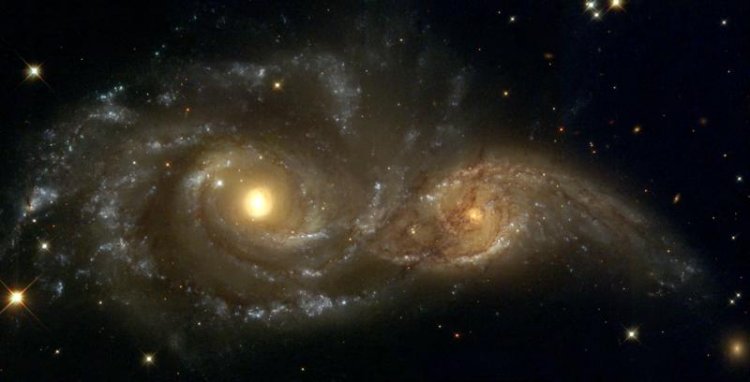 Galaxy interaction is an encounter between two (or more) galaxies that is close enough for the mutual gravitational attraction to alter the appearance and, in some cases, the composition, of one or both systems (Fig 1). Classic examples include NGC 5195, the little, tidally distorted companion of the Whirlpool Galaxy, and the Antennae. Extreme cases of interaction result in galaxy mergers or galaxy cannibalism.

Galaxy merger is the process that takes place when two galaxies collide with one another. If the galaxies become caught in one another's gravitational field they do not simply make a close pass, undergo galaxy interaction, and continue their separate ways into intergalactic space. Instead they spiral into one another and form a single galaxy at the end of the interaction. It is thought that giant elliptical galaxies are the products of mergers between spiral galaxies. Since the spaces between individual stars in galaxies are so large, even though the galaxies appear to collide, the stars contained within them do not. There's enough space for the two galaxies to virtually pass through one another like interlinking fingers. The huge gravitational fields of the galaxies, however, distort their shapes and the close stellar encounters swing the stars into randomly orientated orbits. Often the interstellar clouds collapse during the merger and many new stars are formed in a process called a starburst. As the galaxies become closer and closer, long tails of stars are strung out in their wake. Sometimes these tail fragments contain enough matter to be thought of as dwarf galaxies in their own right.

A tidal tail is a tail-like structure of stars that has been flung out behind a galaxy when it merges with another system galaxy. Tidal tails are produced when the galaxies fall into each other's gravitational potential wells and may persist long after the merger has taken place.

Galaxy cannibalism is the swallowing of a smaller galaxy by a much larger one, in contrast to a galactic merger, which involves two galaxies of similar size. Most examples of cannibalism involve giant or supergiant ellipticals, at the heart of rich clusters of galaxies (those having many members within a relatively compact region of space), drawing in and ingesting other members of their fold. Tell-tale signs of a big elliptical having recently (in cosmic terms) swallowed a disk galaxy, for example, include significant amounts of dust and young stars, loops and shells of luminous matter, and various other phenomena, such as powerful radio emission, that suggests the central supermassive black hole of the swallowing galaxy has just received a fresh consignment of matter. On a less dramatic scale, dwarf galaxies are frequently cannibalized by their larger neighbors. The Sagittarius Dwarf Elliptical Galaxy, for example, is currently being devoured by the Milky Way.