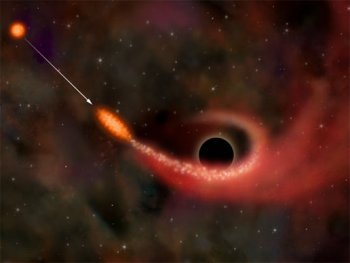 Artist's impression of s supermassive black hole ripping apart a star and consuming some of its matter. Illustration: NASA/CXC/M.Weiss. 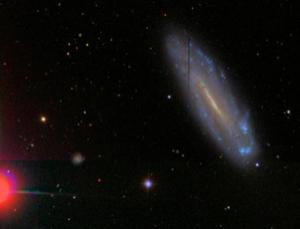 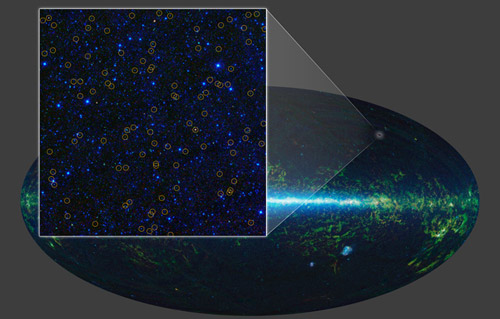 The Wide-field Infrared Survey Explorer has identified millions of objects that may be quasars – intensely bright active galaxies with supermassive black holes at their heart. This image zooms in on one small region sky surveyed by WISE, covering an area about three times larger than the Moon. The WISE quasar candidates are highlighted with yellow circles. Image credit: NASA/JPL-Caltech/UCLA.

A supermassive black hole is a black hole with a mass of tens of thousands to billions of solar masses. The central region of virtually every galaxy is thought to contain an object of this type. The primary evidence for supermassive black holes comes from optical and radio observations which show a sharp rise in the velocities of stars or gas clouds orbiting the centers of galaxies. High orbital velocities mean that something massive is creating a powerful gravitational field which is accelerating the stars. Additionally, X-ray observations indicate that a large amount of energy is produced in the centers of many galaxies, presumably by material falling into the accretion disk that surrounds the central black hole.

The current heavyweight champion of known supermassive black holes is that at the center of a quasar called OJ287, weighing in at 18 billion solar masses. This quasar lies about 3.5 billion light-years away in the constellation Cancer. The mass of its central black hole, which is six times greater than that of the next nearest known rival, has been measured quite accurately because there is a second massive black hole in the heart of the OJ287 system. The smaller black hole, which has a mass of only about 100 million Suns, orbits around its much greater partner at a distance of a mere 1.5 light-years.

Recent research, including results from the Chandra X-ray Observatory, suggests that galaxies and their central black holes don't grow a steady rate, but in fits and starts. In the beginning of a growth cycle, the galaxy and its central black hole accumulate matter. The energy generated by the jets that accompany the growth of the supermassive black hole eventually brings the in-fall of matter and the growth of the galaxy to a halt. The activity around the central black hole then ceases because of the lack of a steady supply of matter, and the jets disappear. Millions of years later the hot gas around the galaxy cools and resumes falling into the galaxy, initiating a new season of growth.

Most galaxies in space have grown in size over time through a series of encounters and mergers (see galaxy merger.) This complex history makes it hard to figure out how, and by how much, their central black holes have enlarged over time. Large galaxies in the present-day universe tend to have supermassive black holes that range in mass from a few million to a few billion solar masses. What isn't clear is what size black holes they started out with, billions of years ago. Valuable light on this problem is shed by galaxies which appear to have avoided any form of interaction or collision throughout their lifetimes to date.

One such system is NGC 4178 – a spiral galaxy with a flat disk and no central bulge (see photo). It has apparently led a solitary existence, so that its small central black hole is either the size it started out with or has been increased only modestly by occasional in-falls of matter from the immediate surroundings. No great influx of material has come from other galaxies or from mergers with other black holes. This makes the exact size of NGC 4178's central black hole of great interest because it is essentially a survivor of the kind of black holes that must have been common in the early universe and that were found in the first galaxies.

Using data from Chandra, astronomers have estimated NGC 4178 to have a central black hole weighing between about 10,000 and 100,000 solar masses, making it one of the lowest-mass nuclear black hole currently known.[1] The fact that several such pristine galaxies turn out to have a small, still-expanding black hole at their core suggests that black holes can grow to intermediate size without mergers, but then need to pool their resources to get much bigger.

If the accretion disk of the central black hole is well supplied with matter falling in from the immediate surroundings of the galactic nucleus, then it will generate large amounts of energy together with powerful jets of radiation in both directions along the rotation axis of the black hole. This gives rise to the phenomenon known as an active galactic nucleus (AGN). Quasars, BL Lacertae objects, and Seyfert galaxies are among the various manifestations of AGN, which depend on the degree of activity and the orientation of the jets of the AGN with respect to our line of sight.

Supermassive black holes and their associated accretion disks were particularly big energy producers in the early universe when galaxies were still young and their inner regions well stocked with material that could feed the central engine. In the present-day universe, most galaxies, including our own Milky Way, are much more sedate. However, AGN activity can still be rekindled if a fresh supply of matter becomes available, as for example occurs when two galaxies collide, or a large galaxy swallows a smaller neighbor.

NASA's Wide-field Infrared Survey Explorer, or WISE, spacecraft has resulted in the discovery a huge number of previously uknown supermassive black holes at the heart of active galaxies thanks to two complete all-sky surveys at infrared wavelengths.

From its observations, astronomers have identified about 2.5 million actively feeding supermassive black holes, at distances stretching out to 10 billion light-years. About two-thirds of these objects were previously unknown because dust in the accretion disks that surround them blocks visible light, although it glows brightly in the infrared.