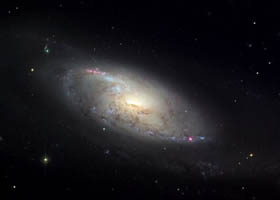 A Seyfert galaxy is galaxy with a small, intensely bright nucleus which shows strong, broad emission lines. Seyfert galaxies, named after Carl Seyfert (1911–1960), who first defined them as a group of similar objects in 1943, are nearly all spiral galaxies or barred spirals.

Two distinct classes were identified by Ed Khachikian and Daniel Weedman on the basis of their emission lines. Class 1 Seyferts, such as NGC 5548, show broadening only of their hydrogen lines – those that can be associated with the highest gas densities. Class 2 Seyferts, such as NGC 1068 (the brightest known Seyfert), show broadening of all their lines. In both cases, the spectrum points to the presence of large amounts of very hot, fast-moving gas close to the galactic center that is being prevented from escaping by a large central mass.

Variations in brightness over periods of a few months exhibited by some Seyferts, for example NGC 4151, show that the bulk of the radiation comes from regions at most a few light-months across. Although the visual luminosity of Seyferts is not unusual for spirals, their total luminosity, including radio wave, X-ray, and, most significantly, infrared emission, is roughly 100 times normal. Taken as a whole, Seyferts display many of the properties of quasars and almost certainly produce the bulk of their energy output in the same way – through the gravitational influence of a supermassive black hole at the heart of an active galactic nucleus.