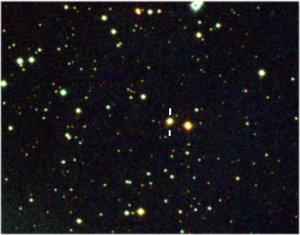 A BL Lacertae object (BL Lac object) is a type of active galactic nucleus (AGN) characterized by a nearly featureless spectrum (i.e., virtually devoid of spectral lines), rapid, marked variability at radio, infrared, and optical wavelengths (often by several magnitudes over a few days or weeks), and strong, variable polarization at radio and optical wavelengths. The prototype, in the constellation Lacerta, was originally classified as a variable star.

BL Lac objects belong to the category of AGN now known as blazars and are believed to be essentially quasars viewed directly down the axis of their powerful jets.