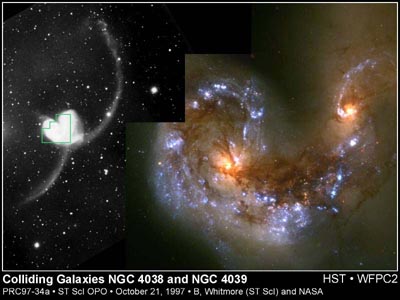 The Antennae (NGC 4038 and NGC 4039) are the nearest and youngest example of a pair of colliding galaxies. The Antennae lie about 63 million light-years away in the constellation Corvus. Each galaxy's gravitational pull has drawn out a curved tail of stars from the other. These structures span a total of some 360,000 light-years and have been produced by a collision between the galaxies that began about 100 million years ago and is still in progress.

In detailed images of the heart of the Antennae, captured by the Hubble Space Telescope, bright knots are visible made up of over 1,000 young star clusters bursting to life. These are infant globular clusters, newly born out of collisions between giant hydrogen clouds in the two galaxies. At the other end of the stellar evolutionary spectrum, X-ray images of the central regions of the galaxies, taken by the Chandra X-ray Observatory, have revealed dozens of bright point-like sources that are probably neutron stars or black holes tearing gas off nearby stars. These collapsed objects are the remains of large stars that formed earlier in the burst of star formation triggered by the collision and that have already died.