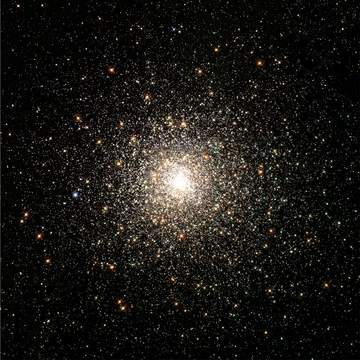 A globular cluster is a spherically symmetric collection of old stars that share a common origin. Globular clusters contain from tens of thousands to millions of stars and measure from 100 to 300 light-years across. Some have been shown, in all likelihood, to contain middleweight black holes in their cores.

Unlike open clusters and stellar associations, which are held together only weakly by gravity and contain Population I objects, globular clusters are tightly gravitationally bound collections of Population II stars. They inhabit the galactic halo and galactic bulge, and show significant concentration toward the galactic center.

A topic of great interest is the origin of globular clusters. It had been assumed that the majority of globulars in the Milky Way were ancient native systems that formed around the same time as the rest of the Galaxy some 10 billion yr ago, though it was known that nearly two dozen group II clusters are prisoners-of-war captured from other, smaller galaxies in the Local Group. Recent research, however, has shown that even some group II systems – the metal poor variety – have been looted from outside. These presumed aborigines have, in turns out, come from the Large Magellanic Cloud and are a billion years younger than had been previously estimated. As a result, astronomers have been forced to rethink their ideas about how the Milky Way evolved and, because globulars are used as a cosmic yardstick, to recheck the distances between galaxies, which might be in error by as much as 7%. Further evidence that globular clusters are not necessarily relics of the earliest generations of stars in a galaxy comes from observations of galaxy collisions. These can give rise to ultra-luminous clusters, which appear to be globular clusters in the making.

Palomar 5, on the other hand, is a globular cluster in its death throes – being torn apart by tidal forces of the Milky Way. This ancient object, on the outskirts of our galaxy, some 75,000 light-years from the Sun, has only about 10,000 stars left. All the rest have been stripped away and now lie in two incredibly long tails, strung across 13,000 light-years of space. In fact, the tails of Palomar 5 delineate the orbital path of this cluster and thus provide a unique opportunity to determine its motion around the Galaxy. Together with the so-called Sagittarius Stream, which emerges from the Sagittarius Dwarf Elliptical Galaxy, there are now two different examples of extended stream-like structures in the galactic halo. The geometry and the velocities of those tidal streams will become important tools for determining the mass of the dark matter halo that surrounds the Milky Way.

One of the nearest globular clusters, M13 (the Great Cluster in Hercules), was the target for an early attempt at CETI, though whether planets exist within globulars clusters is still a matter of debate.1 Other bright, well known globular clusters include M2, M3, M4, M5, M80, Omega Centauri, and 47 Tucanae.