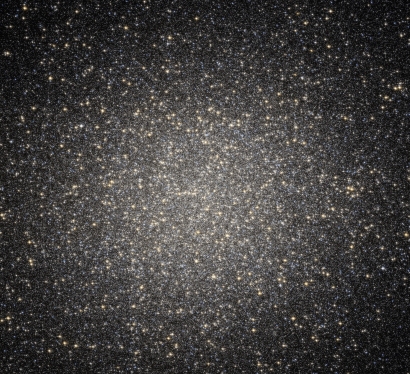 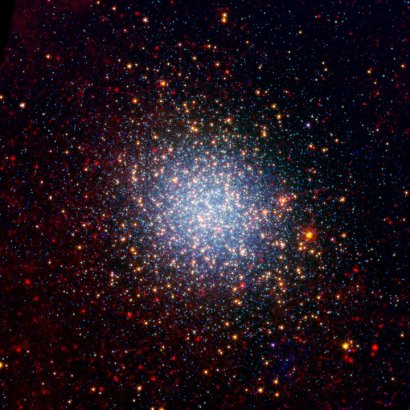 Spitzer Space Telescope and CTIO image of Omega Centauri. Red- and yellow-colored dots are red giant stars revealed by Spitzer. Blue dots are less evolved, like our own sun, and were captured by both Spitzer in infrared eyes and the Blanco 4-meter telescope at Cerro Tololo Inter-American Observatory in visible light. (Some of the larger red spots in the picture are external galaxies.)
Credit: NASA, JPL-Caltech, and M. Boyer (Univ. of Minnesota).

Omega Centauri (NGC 5139) is the largest and most luminous globular cluster in the Milky Way Galaxy. Omega Centauri was first listed in Ptolemy's catalogue nearly two thousand years ago as a single star and given a stellar designation by Bayer. In 1677 Edmond Halley reported it as a nebula, and in the 1830s the John Herschel was the first to correctly identify it as a globular cluster.

With a mass of roughly 5 million solar masses, Omega Centauri is about 10 times as massive as a typical big globular and about as massive as the smallest of whole galaxies. It also rotates faster than most globular clusters and has distinctly flattened shape. In the Local Group, it is outshone, among others of its type, only by G1 in the Andromeda Galaxy. A 1999 study suggested that the stars of Omega Centauri did not all form at once but rather over a 2-billion-year period, with several starburst peaks – the first evidence of multiple populations in a globular cluster. The team who carried out this work speculated that this result may indicate that Omega Centauri is the remnant of the nucleus of a small galaxy that merged with our Milky Way. This suspicion was confirmed in 2008 when a team of astronomers working with the Hubble Space Telescope and the Gemini Observatory reported1 that Omega Centauri probably harbors an intermediate-sized black hole at its core. From the motions of stars at the center of Omega Centauri, which are much higher than expected from the mass deduced from the number and type of stars seen, they deduced the mass of this black hole to be about 40,000 times that of the sun.