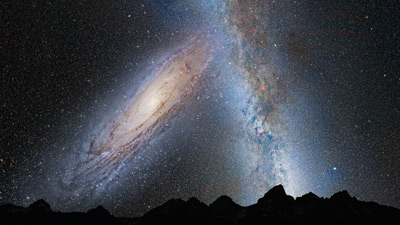 An illustration shows the night sky 3.75 billion yr from now. Andromeda (left) fills the field of view and begins to distort the plane of our Milky Way Galaxy. Image credit: NASA.

The Andromeda Galaxy, also known as M31 and NGC 224, is the nearest large galaxy to our own, at a distance of about 2.5 million light-years. Classified as an Sb spiral, it is a major member of the Local Group. It lies in the constellation Andromeda and is the most remote object normally visible to the naked eye, though keen observers can sometimes see the Triangulum Galaxy (M33).

Recent estimates suggest that Andromeda is bigger but less massive than the Milky Way Galaxy. It is accompanied by at least 10 satellite galaxies, including M32 and M110 (both visible through binoculars), NGC 185 (discovered by William Herschel), NGC 147 (discovered by Louis d'Arrest), the dwarf spheroidal systems And I, And II, And III, and And V, the dwarf irregular And IV (though this may be a cluster), And VI (known as the Pegasus Dwarf), and And VII (known as the Cassiopeia Dwarf).

The Andromeda Galaxy is also home to more than 300 globular clusters, the brightest of which, G1, is the most luminous globular in the Local Group (visual magnitude 13.7); it outshines the brightest globular in the Milky Way, Omega Centauri, and can be glimpsed by large amateur telescopes under favorable conditions.

The Hubble Space Telescope has revealed the appearance of a double nucleus in Andromeda. It may be that there are really two bright nuclei, perhaps because a smaller galaxy was cannibalized in the past, or that there is a single core partly obscured by dust.

The earliest known reference to our large galactic neighbor is by Al-Sufi who called it "the little cloud" in his Book of Fixed Stars (AD 964). For many years it was known as the Great Andromeda Nebula and believed to be one of the closest nebulae. William Herschel thought its distance would "not exceed 2,000 times the distance of Sirius" (i.e., 17,000 light-years); nevertheless, he viewed it as the nearest "island universe" like our Milky Way.

In 1912, Vesto Slipher found the radial velocity of Andromeda to be the highest cosmic velocity ever measured up to that time – about 300 km/s in approach (later refined to 266 km/s) – pointing to an extragalactic nature. In 1923, Edwin Hubble found the first Cepheid variable in the Andromeda Galaxy and thus established the intergalactic distance of and the true nature of M31 as a galaxy. Because he was not aware that there are two different kinds of Cepheid, however, his distance was out by a factor of more than two – an error not discovered until 1953 following the completion of the Hale Telescope.


Collision between Andromeda and the Milky Way

The Andromeda is heading our way at a speed of about 250,000 mph. At that rate it will take roughly 4 billion years to arrive and a further 2 billion years for the colliding systems to completely merge under their mutual tug of gravity and reshape into a single elliptical galaxy. Although the galaxies will plow into each other, stars inside each galaxy are so far apart that they will not collide with other stars during the encounter. However, the stars will be thrown into different orbits around the new galactic center. Simulations show that our solar system will probably be tossed much farther from the galactic core than it is today.

To make matters more complicated, M31's small companion, the Triangulum Galaxy, M33, will join in the collision and perhaps later merge with the M31/Milky Way pair. There is a small chance that M33 will hit the Milky Way first.

The Andromeda Galaxy was the source of an extraterrestrial message received by a newly-built radio telescope in the TV drama series and novel, A For Andromeda.

In the Star Trek original series episode "By Any Other Name," the Enterprise is commandeered by the Kelvans whose spacecraft, having crossed the intergalactic void from Andromeda, crashed on an uncharted planet in the Milky Way.