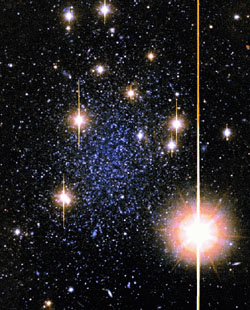 The Pegasus Dwarf Spheroidal Galaxy (Peg dSph) is a dwarf spheroidal galaxy in the constellation Pegasus. It is a small, newly-recognized member of the Local Group. Also known as Andromeda VI, because it is probably a satellite companion of the Andromeda Galaxy and the sixth such to be found, the Pegasus Dwarf is almost hidden in the glare of relatively bright foreground stars in our own Milky Way.

The absence of young and intermediate-age stars in Peg dSph, and another recently-found satellite of the Andromeda Galaxy, the Cassiopeia Dwarf, suggests they have been stripped of star-forming gas by Andromeda's gravitational field. This is surprising in view of their considerable distance from the great spiral and may indicate that Andromeda is more massive than previously thought. The Pegasus Dwarf Spheroidal was discovered in 1999 by various researchers on the Second Palomar Sky Survey.