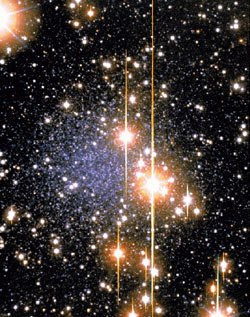 The Cassiopeia Dwarf (Cas dSph) is a recently-discovered dwarf spheroidal galaxy that is also a satellite galaxy of the Andromeda Galaxy (M31), and hence also a member of the Local Group. The Cassiopeia Dwarf, also known as Andromeda VII, was found in 1998 in the constellation Cassiopeia, together with another small satellite of M31, the Pegasus Dwarf (Peg dSph), by a team of astronomers in Russia and the Ukraine. At a distance of 2.6 million light-years from the Sun, Cas dSph and Peg dSph are farther from Andromeda than its other known companion galaxies, yet still appear bound to it by gravity. Neither galaxy contains any young, massive stars or shows traces of recent star formation. Instead, both seem dominated by very old stars, with ages up to 10 billion years.