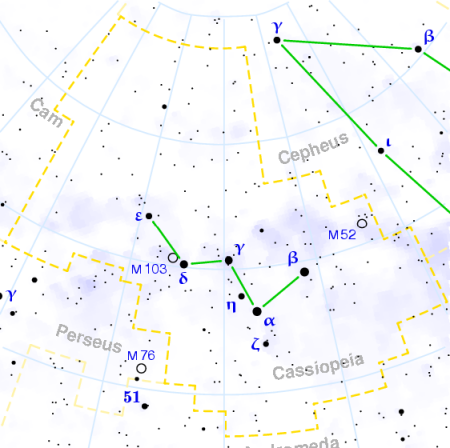 Cassiopeia (abbreviation: Cas), the Queen, mother of Andromeda, is a large northern constellation with a distinctive "W" shape marked by five stars of the third magnitude, and with the Milky Way as a backdrop. It lies near Cepheus and not far from the north celestial pole.

A binocular sweep of the region is rewarding (especially around Delta Cas) and small instruments reveal an interesting assortment of nebulae and open clusters. See below for details of the constellation's brightest stars and interesting deep sky objects.

The Heart Nebula (IC 1805) is an emission nebula located in the Perseus Arm of our galaxy in Cassiopeia. It lies about 7,500 light-years away. The brightest part of the nebula – the bright region near the center – is classified separately as NGC 896, because it was the first part to be discovered. An open cluster in the central region, called Melotte 15, contains some stars up to 50 times as massive as the Sun.