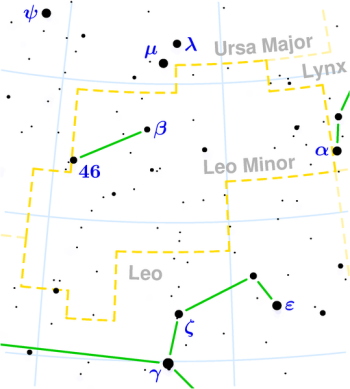 Leo Minor (abbreviation: LMi), the Small Lion, is a small, faint northern constellation that lies between the southern border of Ursa Major (at the rear feet) and the northern border of Leo. It has no star designated Alpha and only one that carries a Greek letter name at all – Beta – though this ranks second in brightness to 46 LMi, also known as Praecipua (visual magnitude 3.79, absolute magnitude 1.41, spectral type K0III, distance 98 light-years).