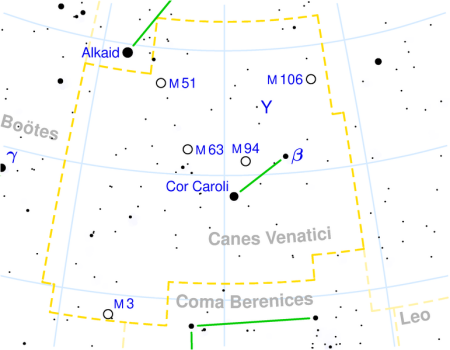 Canes Venatici (abbreviation: CVn), the Hunting Dogs, is a small, faint northern constellation, surrounded by Ursa Major to the north, Boötes to the east, and Coma Berenices to the south. Its only star brighter than magnitude 4.0 is Alpha2 CVn, or Cor Caroli (visual magnitude 2.89; absolute magnitude 0.89; spectral type A0Vp; distance 82 light-years; RA 12h 56m 2s, Dec +38° 19' 03"). Its second brightest star, Chara, however, is of great interest because it has been ranked as the nearest Sunlike star most likely support life. Canes Venatici is particularly well-endowed with galaxies. See below for details of the constellation's interesting deep sky objects.

The Canes Venatici I Group is a loose and sparse group of galaxies centered on NGC 4214, 4244, and 4395, about 15 million light-years away. It contains a large number of medium-sized dwarf systems. The spiral galaxy M94 also probably lies at the back of this group.

The Canes Venatici II Group is a group of galaxies with a large collection of spiral galaxies, the dominant members are which are probably M106, NGC 4096, and NGC 4490. It lies at an average distance of 22 million light-years , directly behind the Canes Venatici I Group.