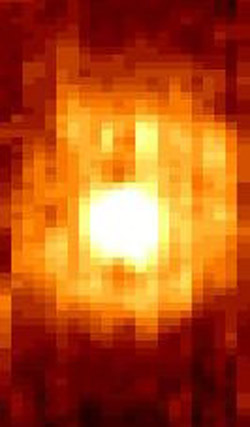 La Superba (Y Canum Venaticorum) is a semi-regular variable red supergiant in the constellation Canes Venatici with a visual magnitude range of 4.8 to 6.3 and a period of 158 days. It was named by Angelo Secchi for its intense red color. La Superba (Y CVn) is one of the coolest known stars. It belongs to the rare J class of carbon stars whose members display an unusual abundance of the carbon-13 isotope.

The red color of Y CVn is caused by large amounts of carbon, in the form of molecules such as carbon monoxide and cyanogen, in the star's outer layers. Absorption of light of shorter wavelengths by these molecules results in the striking ruddy coloration.

La Superba is probably close to the end of the process of fusing helium to carbon in its core. It is losing mass about a million times faster than does the Sun does via the stellar wind and is surrounded by a shell of ejected material some 2.5 light years across.