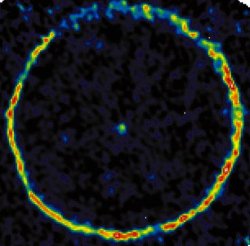 TT Cygni, a carbon star that lies about 1,500 light-years away in the constellation Cygnus. This false-color image was made using a coordinated array of millimeter wavelength radio telescopes and shows radio emission from carbon monoxide (CO) molecules in the surrounding gas. The central emission is from material blown off the red giant over a few hundred years while the thin ring, with a radius of about 1/4 light-year, represents a shell of gas that has been expanding outward for 6,000 years. Credit: H. Olofsson (Stockholm Observatory) et al.

A carbon star is a red giant whose spectrum is dominated by strong absorption bands of carbon-containing molecules. The Swan bands of C2 are especially prominent, with absorption by CN, CH, C3, SiC2, and C aII present to varying degrees, with often a strong sodium D line.

Carbon stars, also known as C stars, have carbon/oxygen ratios that are typically four to five times higher than those of normal red giants and show little trace of the light metal oxide bands that are the usual red giant hallmark. They resemble S stars in their relative proportion of heavy and light metals, but contain far more carbon in their upper layers. The carbon is likely the dredged-up ashes of nuclear helium burning in the stellar interior. Carbon stars lose a significant fraction of their total mass in the form of a stellar wind which ultimately enriches the interstellar medium – the source of material for future generations of stars.

Carbon stars were previously classified as stars of spectral type R (hotter, with surface temperatures of 4,000 to 5,000 K) and N (up to 10 times more luminous but cooler, with a temperature of about 3,000 K). They are typically associated with some circumstellar material in the form of sooty shells, disks, or clouds. Examples include TT Cygni (shown in the accompanying image) and U Camelopardalis.