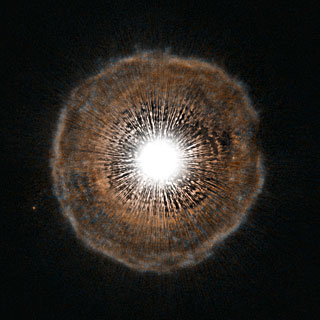 U Camelopardalis (U Cam), a semi-regular pulsating star (magnitude 7.7–9.5), is also a rare type of star known as a carbon star – a red giant whose spectrum has prominent absorption bands of carbon-containing molecules. It lies in the constellation Camelopardalis (The Giraffe), near the North Celestial Pole.

U Cam is an aging star, running low on nuclear fusion fuel, and is losing material at a rapid rate. A powerful stellaer wind blowing from its surface may ultimately expel as much as half the star's original mass. Additionally, every few thousand years the star blows off a shell of gas as a layer of helium around its core begins to fuse. The results of the latest outburst are clearly visible in the accompanying Hubble photo as a bubble of glowing gas surrounding the bright central star (which is greatly over-exposed in the image and hence appears far larger than it should).