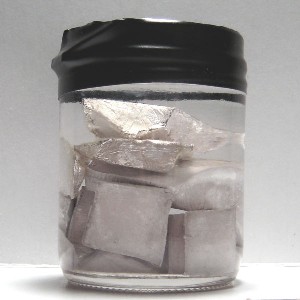 Sodium (Na) is a soft, light, extremely malleable, metallic element that reacts explosively with water. It is one of the alkali metals (found in Group 1 of the periodic table). It is naturally abundant in combined forms, notably in common salt (sodium chloride), and is present in a wide variety of important compounds. Sodium is the sixth most abundant element on Earth (see terrestrial abundance of elements) and makes up about 2.8% of the crust by weight. It was first isolated by Humphry Davy in 1807 by electrolysis of caustic soda (sodium hydroxide). The name derives from the English soda, and the chemical symbol comes from the Latin natrium, which means the same. Sodium is very electropositive, and is produced by the electrolysis of fused sodium chloride.

Sodium rapidly oxidizes in air and reacts vigorously with water to give off hydrogen, so it is usually stored under kerosine. Most sodium salts are highly ionic and soluble in water, their properties being mainly those of the anion (negative ion). Sodium forms some organic compounds such as alkyls.

Liquid sodium is used as a coolant in certain nuclear reactors, and as a reagent in the chemicals industry. Sodium salts (see below) are more important than the metal itself.

Sodium bicarbonate (NaHCO3), also called sodium hydrogencarbonate or, popularly, bicarbonate of soda, an acid salt that is a white crystalline solid made from sodium carbonate and carbon dioxide. It gives off carbon dioxide when heated to 270°C or when reacted with acids, and is used in baking powder, fire extinguishers, and as an antacid.

Sodium borates are sodium salts of boric acid, differing in their degree of condensation and hydration; borax is the most important. They are white crystalline solids, becoming glassy when heated, and are used in the manufacture of detergents, water-softeners, fluxes, glass, and ceramic glazes.

Sodium chlorate. A white, crystallizing compound (NaClO3), a strong oxidizing agent. It is used as a general herbicide and soil sterilizer and as a laboratory reagent. It is made by the electrolysis of a solution of sodium chloride.

Sodium hydroxide (NaOH), or caustic soda, is a white deliquescent solid, usually supplied as pellets. It is a strong alkali, and absorbs carbon dioxide from the air. It is made by electrolysis of sodium chloride solution or by adding calcium hydroxide to sodium carbonate solution. Caustic soda is used in the production of cellulose, plastics, soap, dyes, paper, and in oil refining. Melting point 318°C; boiling point 1390°C.

Sodium nitrate (NaNO3), or soda niter, is a colorless crystalline solid, occurring naturally in Chile saltpeter (found in large quantities, as its name suggests, in Chile). Its properties are similar to those of potassium nitrate (see potassium), but as it is hygroscopic it is unsuitable for gunpowder. Melting point 307°C.

Sodium thiosulfate (Na2S2O3), or hypo, is a colorless crystalline solid. It is a mild reducing agent, used to estimate iodine, and as a photographic fixer, dissolving the silver halides which have remained unaffected by light.

Sodium in the body helps regulate water balance, helps maintain normal heart rhythm, and is involved in the conduction of nerve impulses and the contraction of muscles (see sodium-potassium pump). The body of an average-sized person contains about 55 g of sodium. The level of sodium in the blood is controlled by the kidneys, which eliminate any excess via the urine.

Almost all foods contain sodium naturally or as an ingredient added during processing or cooking. The principal forms of sodium in food are sodium chloride (table salt) and sodium bicarbonate (baking soda). Apart from table salt, the main dietary sources of sodium are processed foods, cheese, breads and cereals, and smoked, pickled, or cured meats and fish. Pickles and snack foods contain large amounts.

Most Western diets contain too much sodium. The average daily consumption is 3 to 7 g, compared with a maximum recommended intake of 1 to 3 g. Excess sodium intake is a contributory factor in the high incidence of high blood pressure (hypertension) in the Western countries. Sodium deficiency, on the other hand is rare, but may be caused by persistent diarrhea or vomiting, through profuse sweating, or through prolonged or excessive treatment with diuretic drugs.

The D lines are two close, prominent lines in the yellow region of the spectrum of neutral sodium at wavelengths of 588.9950 and 589.5924 nanometers (approximately 5890 Å and 5896 Å). They were labeled as feature D in the solar spectrum by Joseph von Fraunhofer and are conspicuous in the light of stars similar in temperature to the Sun (see Fraunhofer lines). They also show up in the spectra of remote stars due to absorption by sodium atoms in the interstellar medium.

The energy level diagram above shows that the D lines are emitted by electron transitions from the 3p to the 3s levels of sodium. The line at 589.0 nm has twice the intensity of the line at 589.6 nm.