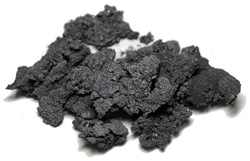 Boron (B) is a soft, brown, amorphous or hard crystalline nonmetallic element (see nonmetal). It is also described as a metalloid element. Boron is the first element in group IIIA of the periodic table, just above aluminum and next to carbon.

The discovery of boron was first announced in 1808 by Humphrey Davy in London and, independently, by the French chemists Joseph Louis Gay-Lussac and Louis-Jaques Thénard in Paris. It later turned out that in both cases the "element" claimed was actually a compound containing not more than 60–70% boron. It was identified as an element by Jons Jacob Berzelius in 1824; although reasonably pure boron – 99% pure was not obtained until 1909. This was not the end of the story, however, because even small amounts of impurities (1% of less) alter the structure and properties of boron profoundly. In fact, boron is affected by impurities to an extent unprecedented among elements and makes the study of its chemistry extremely difficult.

The difficulty in isolating and studying boron in its pure state has resulted in it being the only element for which the ground state is not experimentally known even at ambient conditions. Only in 2009 was work published which established the phase diagram of boron and the existence of a new most dense, hard phase of the element. This phase represents the first known case of an ionic crystal consisting of a single element.

Boron is extracted mainly from the ores kernite (its chief ore ) and borax. Its name comes from the Arabic buraq, for 'borax'. Boric acid is sometimes found in volcanic spring waters.

Boron has three black crystalline allotropes (see allotropy) and an amorphous form, and is best prepared by reduction of the halides with hydrogen.

Borax is a hydrated sodium tetraborate, Na2[B4O5(OH)4]·8H2O – the most common borate mineral. Borax may be colorless or white, transparent, or opaque. The anion is strongly hydrogen bonded to water. Borax is used as a source of boron compounds, and also to make heat-resistant glass – in particular, the manufacture of borosilicate (Pyrex) glass which has good resistance to sudden temperature changes. The principal constituents of this type of glass (from which ovenware is made) are silica (about 80%) and borax (about 12%).

Borax is also used in glazing pottery and other ceramic articles, in vitreous enamel finishes for stoves, cookers, and baths, and for coating paper. pottery glaze, water softeners in washing powders, fertilizers, and pharmaceuticals. If borax is heated sufficiently it melts to form a glassy substance in which metallic oxides will dissolve. The compounds that are formed by the reaction between borax and the metal oxides are sometimes highly colored, the color being characteristic of the metal. Thus it is possible to identify the metal present by the color it gives to a borax bead. On account of the ability of metallic oxides to dissolve in molten borax, borax is used as a flux component in removing oxides from metal surfaces in preparation for soldering or welding. Borax is found in large deposits in dried-up alkaline lakes in arid regions as crusts or masses of crystals. A major source is Searles Lake, California.

Kernite is a mineral form of hydrated sodium tetraborate, Na2B4O7.4H2O, first found in 1926 associated with borax in Kern County, California. Deposits of it were later discovered and mined in Argentina, Spain, and Turkey. Kernite forms colorless monoclinic crystals, and occurs as veins in clay shale beds. It is a major source of boron.

Boron is used in pyrotechnics (see fireworks) and flares to produce a green color; in some rockets as an ignition source, and as dopant in solar photovoltaic devices.

Boron-10, one of two naturally occurring isotopes of boron (the other is boron-11), is a good absorber of neutrons and is therefore used in the control rods of nuclear reactors, as a radiation shield, and as a neutron detector (see boron counter). Boron filaments have found application in the aerospace industry because of their high strength and low weight. Boron is added to steels to make them hard. Pyrex glass is tough and heat resistant because of the boric oxide used to make it.

Boron forms compounds, directly with fluorine, chlorine, bromine, oxygen, sulfur, and carbon. Boron carbide, which is almost as hard as diamond, is formed when boron and carbon are heated together in an electric furnace. With metals, boron forms borides, made by combining the elements at high temperature; all borides are extremely hard and are used as abrasives and refractories. Although the properties of boron and most of its compounds are those of a non-metal, the element is unusual in that in boron phosphate it behaves like a metal.

Boric acid, also called boracic acid, H3BO3, is a soft, colorless, crystalline solid and a weak inorganic acid. It occurs naturally in some volcanic hot springs and can be made from borax. It gives boric oxide (B2O3) when strongly heated; sodium borate typifies its salts. Boric acid is used as an external antiseptic, in the production of glass, as a welding flux, and as an insecticide against ants and cockroaches.


A borate is any salt of boric acid or of more complex oxyacids of boron. Many borates exist as minerals, the most important of which are borax, colemanite, and kernite – all used as sources of boron compounds. Borates readily form glasses. For more about sodium borate see below. H2O2 (hydrogen peroxide) or Na2O2 give peroxyborates used in washing powders.

Borates contain planar trigonal BO3 and tetrahedral BO4 groups, either of which may be discrete or linked. Hydroxyl groups may be coordinated to boron. Pyroborates, e.g., Co2B2O3, contain two BO3 linked through one oxygen. Polyborates contain infinite chains or rings, e.g. B3O3 rings in metaborates (B3O6)3- or linear [BO2]nn- (in LiBO2), two rings linked through a tetrahedral boron KB5O6(OH)4.2H2O.

Borazon is a cubic form of boron nitride (BN), resembling diamond in structure and properties. It is made by heating hexagonal boron nitride (a white powder resembling graphite) to 1,500°C at 65,000 atmospheres pressure. Borazon is as hard as diamond, and more useful industrially because it is more resistant to oxidation and heat.

Boron is an essential trace element for the growth of plants, but is not required by animals – in fact, it can be toxic in excess. We take in about 2 milligrams of boron each day in our food. The possibility of boron-based life has been considered.