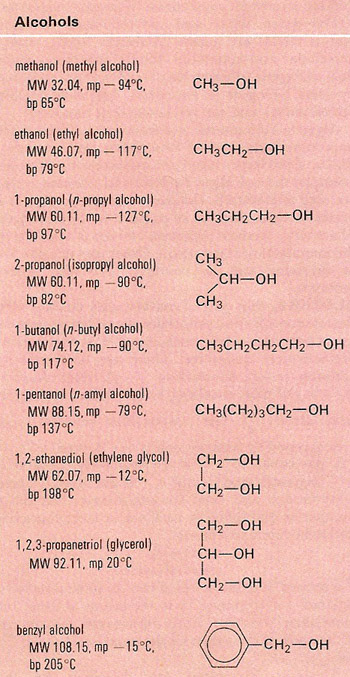 An alcohol is an aliphatic organic compound that contains a hydroxyl group (–OH) attached to a carbon atom in a hydrocarbon chain, i.e., has the general formula ROH. Alcohols occur widely in nature, and are used as solvents in lacquers and varnishes, in antifreezes, and in chemical manufacture, for example of dyes and perfumes. They are obtained by fermentation, oxidation, and hydration of alkenes from petroleum and natural gas, and by reduction of fats and oils.

The simplest alcohols are methanol (CH3OH) and ethanol (C2H5OH). Ethanol is the alcohol in alcoholic drinks such as wine and beer (see below).

Alcohols are also classified as monohydric, dihydric, etc., according to the number of hydroxyl groups. If an alcohol has two –OH groups in its molecule, it is called a diol. If it has three, it is a triol, and so on.

When alcohols react with alkyl halides, such as methyl bromide (CH3Br), esters are produced. When alcohols are dehydrated, the products are alkenes or ethers.

A diol is an alcohol that contains two hydroxyl groups per molecule.


Alcoholic drinks and their effects

As well ethanol, many alcoholic drinks contain small amounts of other biologically active compounds known as congeners, which include polyphenols, other alcohols such as methanol, and histamine. Congeners are produced along with ethanol during fermentation or the drink's aging process, and are thought to contribute to the intoxicating effects of a drink, and the subsequent hangover. People who drink pure ethanol-based alcohols such as vodka have been shown to suffer fewer hangover symptoms than those who drink darker beverages such as whisky, brandy, and red wine, all of which have a much higher congener content.