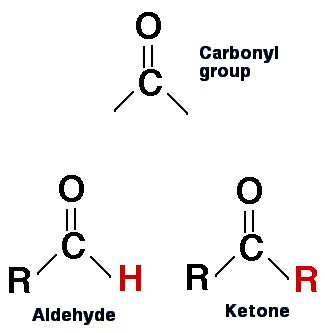 The structure of aldehydes and ketones compared.

A ketone is an organic compound containing a nonterminal carbonyl (C=O) group flanked by two alkyl groups and having the general formula RR'CO. The simplest ketones are propanone (acetone, CH3COCH3) and butanone (methyl ethyl ketone, CH3COC2H5). Ketones may be aliphatic, aromatic, alicyclic, or mixed. They resemble, but are less reactive than, aldehydes, and are used as solvents and in industrial synthesis. They can be distinguished from aldehydes by giving negative test results with Fehling's solution (brick red precipitate) or Tollens' reagent (silver mirror). Ketones give red-orange precipitates with 2,4-dinitrophenyl hydrazine.

Ketones may be obtained by oxidation of secondary alcohols. Aromatic and mixed ketones are usually prepared by Friedel-Crafts reactions using acyl halides. Aliphatic ketones are usually liquids and aromatic ketones solids; they have etheral or aromatic odors. They are reduced to secondary alcohols but are resistant to oxidation and give mixtures of acids and other products when strongly oxidized. They form oximes with hydroxylamine, hydrazones with hydrazine, and semicarbazones with semicarbazide. Isonitrosoketones are formed by the action of sodium nitrite.

The cyclic ketones have the carbon of the carbonyl group as part of a ring. They are formed by the dry distillation of the calcium or barium salts of acids or by passing the acids over titanium dioxide (TiO2) at 400°C.

The ketones acetoacetic acid, acetone, and β-hydroxybutyrate (known as ketone bodies) are produced during the metabolism of fats.


Acetone is the simplest ketone, having the chemical formula CH3COCH3. Also known as propanone, dimethyl ketone, 2-propanone, propan-2-one, and beta-ketopropane, it is a fragrant, colorless, flammable liquid with melting point of -95.4°C and a boiling point of 56.53°C. It has a relative density of 0.819 (at 0°C).

Acetone is readily soluble in water, ethanol, and diethyl ether, and itself serves as an important solvent. It is also used in chromatography and in the preparation of tissues for enzyme extraction. It is produced by the fermentation of starch or dehydrogenation of 2-propanol.

The most familiar domestic use of acetone is as the active ingredient in nail polish remover. Acetone is also used in the manufacture of plastic, fibers, drugs, and other chemicals.

Acetone is produced in the body as a result of the oxidation of fats. In abnormal conditions (for example, starvation) and in diabetes, acetone and other ketones may accumulate in the blood (ketosis).