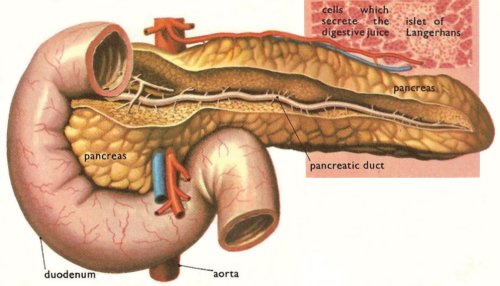 Dissection of the pancreas, showing the pancreatic duct leading into the duodenum. The section above shows an islet of Langerhans.

Diabetes mellitus is a life-long disease marked by high levels of sugar in the blood. It can be caused by too little insulin (a hormone produced by the pancreas to regulate blood sugar), resistance to insulin, or both.

The sugar glucose is a vital source of energy for the body and comes from the food we eat. The role of insulin is to move glucose from the bloodstream into muscle, fat, and liver cells, where it can be used as fuel. People with diabetes have high blood glucose because their pancreas does not make enough insulin or their muscle, fat, and liver cells do not respond to insulin normally, or both.

Diabetes was well known to the ancient Greeks and it is from them the name comes. Diabetes means a siphon through which water runs, and refers to the great thirst of the diabetic and the large volume of urine produced. Mellitus means honey-sweet, an adjective to describe the sweet taste of diabetic urine.

The discovery that the sweetness of the urine in diabetes is due to the presence of sugar is attributed to the English physician Thomas Willis (1621-1675). The identification of the sugar as glucose, however, was not made until many years later.

There are three major types of diabetes:

The American Diabetes Association recommends that all adults be screened for diabetes at least every three years. A person at high risk should be screened more often.

Patients with type 1 diabetes usually develop symptoms over a short period of time, and the condition is often diagnosed in an emergency setting. In addition to having high glucose levels, acutely ill type 1 diabetics have high levels of ketones.

Ketones are produced by the breakdown of fat and muscle, and they are toxic at high levels. Ketones in the blood cause a condition called "acidosis" (low blood pH). Urine testing detects both glucose and ketones in the urine. Blood glucose levels are also high.

There is currently no cure for diabetes. The immediate goals are to stabilize the patient's blood sugar and eliminate the symptoms of high blood sugar. The long-term goals of treatment are to prolong life, relieve symptoms, and prevent long-term complications such as heart disease and kidney failure.