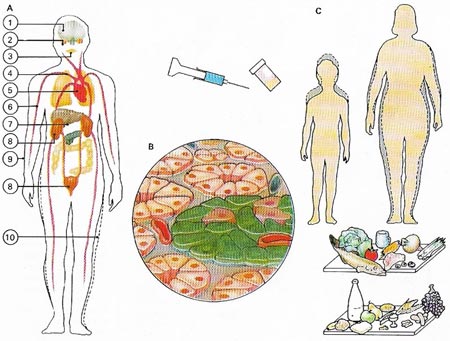 Fig 2. Diabetes mellitus (A) may result in drowsiness and coma (1), impaired vision(2), dry mouth (3), over-breathing(4), cardiac failure (5). High blood sugar levels (6), fatty liver (7), kidney and bladder infections (8), itchy skin and delayed wound healing (9) and loss of weight (10). It is due to a lack of the hormone insulin produced in the beta cells of the pancreatic islets of Langerhans (green) (B). Treatment (C) for juveniles includes a varied, low-carbohydrate diet, usually in conjunction with regular insulin injections. Adults also need a low-carbohydrate diet and weight loss, but drugs may help to control the disease. If not, then insulin may be administrated. 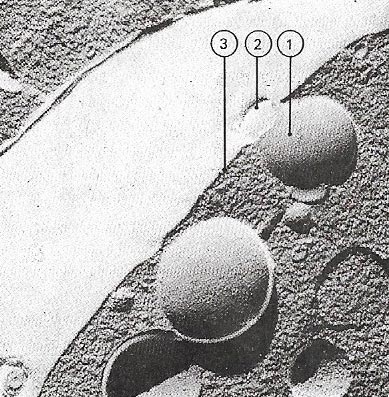 Fig 3. Hormones are stored in the cells of a gland in small sacs or vacuoles (1) until required. Shown is a specially prepared slice through a pancreatic islet cell that makes insulin. When blood glucose levels are high, after a meal, the cell discharges the insulin (2) from within these vacuoles through the cell wall (3). In diabetes insufficient insulin is produced so blood sugar levels rise. 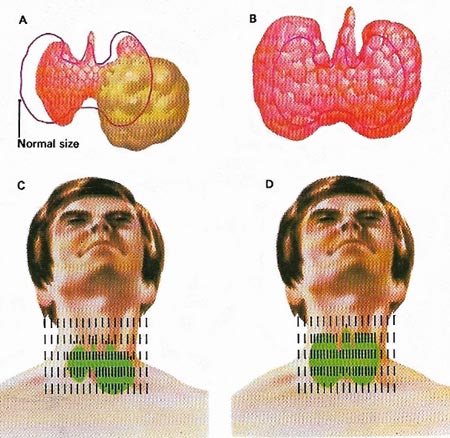 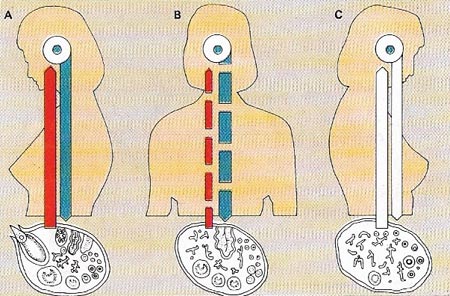 Fig 5. Before menopause (A) there is a balanced feedback mechanism between the ovaries, which produce the hormone oestrogen (red), and the anterior pituitary gland which produces ovary stimulating hormones (blue). At menopause (or the "change of life") (B), which usually occurs at 45 to 50, the ovaries cease producing an ovum and thus normal oestrogen amounts each month. As a result the pituitary produces an excess of hormones and the consequent high levels and hormone imbalance are thought to be responsible for the common symptoms of sudden heat sensations, headaches and weight gain. Estrogens can be given as treatment. After menopause (C) hormone production ceases and the symptoms eventually lessen. 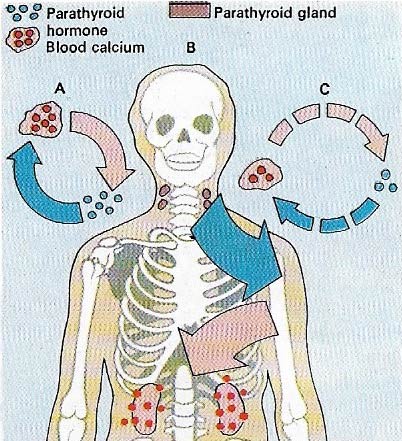 Fig 6. Overactivity of the four parathyroid glands in the neck leads to raised levels of calcium in the blood (A). Calcium is also lost in the urine where kidney stones and kidney damage result. The bones are weakened as calcium and phosphate are removed from the bone structure (B) in the body's attempt to maintain the high blood levels of calcium. Low levels (C) result if glands are damaged.

The glands may be divided into two types according to where their secretions go. Those that release their secretion into a duct or tube are called the exocrine glands, while those without such tubes release their product, known as hormones, directly into the blood and are called endocrine glands. The exocrine glands normally release their products to the body surface – for example, sebum to lubricate hair and skin or tears to moisten the eyes – or into the alimentary tract, providing the digestive juices. It is alterations in the activities of the endocrine glands that are normally termed glandular disorders, although glandular fever is a disorder of yet another series of glands – the lymph glands – which are part of the body's defences. This article deals mainly with diseases and disorders of the endorine system.

The most common endocrine disorder is diabetes mellitus, in which insulin lack occurs (Fig 2). The major part of the pancreas is exocrine, producing digestive juices, but about one per cent of the bulk is due to a million clumps of cells called the islets of Langerhans. Lack of insulin secretion from these islets leads to a failure to control the use of the body fuels and building blocks (sugars, fats, and amino acids). In diabetes these are overproduced at the expense of the body tissues and are under-used (Fig 3). Sugars, such as glucose, accumulate in the urine along with excess fluid and salts. This great loss of water and urine led the Greek Aretaeus, in the 1st century AD, to call the disease diabetes, after the Greek word for "siphon". Thirst and weight loss occur and high sugar levels encourage infections. The situation can be corrected by insulin injections. When diabetes appears later in life some insulin is produced by the pancreas, but insufficient to keep the metabolism entirely normal. Such patients are often overweight, but with weight loss and controlled intake of carbohydrate foods, extra insulin is often not necessary to treat their diabetes.

While long-standing diabetes may lead to circulatory disorders, careful control helps to minimize such problems. Diabetes of varying severity may affect two or three per cent of the population in Europe and the United States, but the opposite situation of overproduction of insulin is very rare. It is caused by an insulin-producing tumor of the pancreas, an insulinoma. Blood sugar falls excessively, resulting in hunger, sweating and altered mental ability.

The next most common group of glandular disorders are those affecting the thyroid gland (Fig 4). Overproduction of thyroid hormone leads to increased demands for food and energy by the body tissues, increased heat production, weight loss, nervousness, and irritability. It may be treated with drugs or thyroid surgery. A lack of thyroid hormone, from failure of the gland, leads to slowness, apathy, weight increase, and susceptibility to cold. It is more common in older people and in those with thyroids that have been overactive in the past. Treatment is by daily thyroid hormone tablets. An enlarged thyroid or goiter is caused by either overactivity or underactivity of the gland. Diets deficient in iodine are one reason for overactivity.

Normally the thyroid gland is directed by a hormone from the anterior pituitary gland at the base of the brain. If the thyroid gland fails to produce sufficient thyroid hormone this is registered by the hypothalamus (part of the brain) and the pituitary which produces thyroid-stimulating hormone in greater amounts in an attempt to restore the normal balance (Fig 1).

Increased pituitary hormone production may, however, be a disorder in its own right, rather than a response to failure of a target gland. If a tumor is present, for instance, hormone production may be excessive. Often only one of the several hormones that the pituitary produces is increased. The effects of such pituitary gland abnormality vary according to which hormone is in excess and other body tissues and glands that respond.

Disturbances of one hormone can have marked effects on normal feedback mechanisms, as is seen with growth hormone from the anterior pituitary. Its lack during childhood leads to dwarfism, while overproduction may lead to gigantism. Too much growth hormone in later life leads to acromegaly. This disease is first noticed because the sufferer's hats, gloves, and shoes need replacing with larger sizes. The nose, lips, tongue, hands and feet broaden and enlarge. Treatment is by X-ray irradiation.

The posterior part of the pituitary normally produces antidiuretic hormone which maintains the correct amount of water in the body. If it is deficient, excess water is lost in the urine; this is diabetes insipidus.

Apart from the endocrine or ductless glands, there are other glands that do not secrete their products directly into the bloodstream but via ducts to the appropriate site. These exocrine glands are affected by their own disorders. A sufferer from mumps has a viral inflammation of the parotid gland. This is one of the salivary glands which produce saliva to moisten the food and begin food digestion. Mumps may affect other glands such as the ovaries and testes.