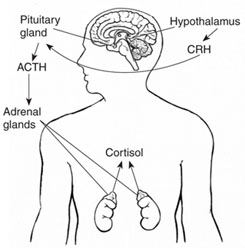 The hypothalamus sends CRH to the pituitary, which responds by secreting ACTH. ACTH then causes the adrenal glands to release cortisol into the bloodstream. 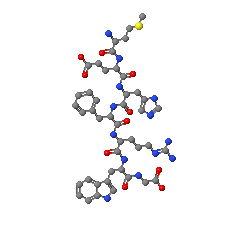 Adrenocorticotropic hormone (ACTH) is a polypeptide hormone, consisting of 39 amino acids, which is synthesized from POMC (pre-opiomelanocortin) and secreted from corticotropes in the anterior lobe of the pituitary gland in response to the hormone corticotropin-releasing hormone (CRH) released by the hypothalamus. ACTH, also called corticotropin, is secreted in short bursts every few hours and is increased by stress. In turn, ACTH controls secretion of corticosteroids, including cortisol (hydrocortisone), aldosterone, and androgens, by the adrenal glands. Most important of these is its stimulation of cortisol production.

ACTH has been used in an effort to induce remission in multiple sclerosis, though its efficacy in this respect is uncertain. ACTH is also used to diagnose disorders of the adrenal glands and, rarely, to treat inflammatory disorders, such as arthritis, ulcerative colitis, and some types of hepatitis.