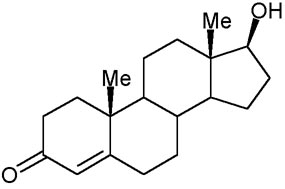 An androgen is any of a group of male sex hormones that stimulate development of the testes and male secondary sexual characteristics, such as growth of facial hair. The primary and best-known androgen is testosterone. Androgens are produced principally by the testes when stimulated by luteinizing hormone but they are also secreted in smaller amounts by the adrenal glands and (in women ) the ovaries.

Androgen is the generic term for any natural or synthetic compound, usually a steroid hormone, that stimulates or controls the development and maintenance of masculine characteristics in vertebrates by binding to androgen receptors. Androgens, which were first discovered in 1936, are also called androgenic hormones or testoids. They are the original anabolic steroids. They are also the precursor of all estrogens, the female sex hormones.

Androgen ablation, also called androgen suppression or androgen deprivation, is treatment to suppress or block the production or action of male hormones. This is done by having the testicles removed, by taking female sex hormones, or by taking drugs called antiandrogens.

Natural or synthetic androgens are used in the treatment of male hypogonadism (underactivity of the testes) to stimulate the development of sexual characteristics, such as growth of facial and pubic hair, enlargement of the genitals, and deepening of the voice. This treatment improves libido and potency but does not increase the production of sperm.

Androgen drugs are also used to stimulate production of new blood cells by the bone marrow in aplastic anemia. They may also be used in the treatment of certain types of breast cancer.

Androgen drugs are commonly used by athletes and body-builders wishing to increase muscle bulk and strength, but this practice is condemned by doctors due to doubts concerning the drugs' benefits and the risk of adverse effects.

Adverse effects include fluid retention, weight gain, increased levels of cholesterol in the blood, and, rarely, liver damage. When taken by women the drugs can cause deepening of the voice and other male characteristics, especially growth of facial hair. Because androgen drugs affect sexual development in babies, they are not prescribed during pregnancy or breast-feeding. They are prescribed with caution during adolescence because they may prematurely halt the growth of the long bones.