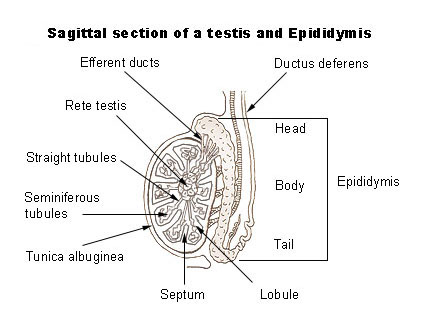 The testes, or testicles, are the male gonads and part of the male reproductive system. They produce sperm and the hormone testosterone.

The testes begin their development high in the abdominal cavity, near the kidneys. During the last two months before birth, or shortly after birth, they descend through the inguinal canal into the scrotum, a pouch that extends below the abdomen, posterior to the penis. Although this location of the testes, outside the abdominal cavity, may seem to make them vulnerable to injury, it provides a temperature about 3°C below normal body temperature. This lower temperature is necessary for the production of viable sperm.

Each testis is an oval structure about 5 cm long and 3 cm in diameter. A tough, white fibrous connective tissue capsule, the tunica albuginea, surrounds each testis and extends inward to form septa that partition the organ into lobules. There are about 250 lobules in each testis. Each lobule contains 1 to 4 highly coiled seminiferous tubules that converge to form a single straight tubule, which leads into the rete testis. Short efferent ducts exit the testes. Interstitial cells (cells of Leydig), which produce male sex hormones, are located between the seminiferous tubules within a lobule.

Sperm are produced by spermatogenesis within the seminiferous tubules. A transverse section of a seminiferous tubule shows that it is packed with cells in various stages of development. Interspersed with these cells, there are large cells that extend from the periphery of the tubule to the lumen. These large cells are the supporting, or sustentacular cells (Sertoli's cells), which support and nourish the other cells.

Early in embryonic development, primordial germ cells enter the testes and differentiate into spermatogonia, immature cells that remain dormant until puberty. Spermatogonia are diploid cells, each with 46 chromosomes (23 pairs) located around the periphery of the seminiferous tubules. At puberty, hormones stimulate these cells to begin dividing by mitosis. Some of the daughter cells produced by mitosis remain at the periphery as spermatogonia. Others are pushed toward the lumen, undergo some changes, and become primary spermatocytes. Because they are produced by mitosis, primary spermatocytes, like spermatogonia, are diploid and have 46 chromosomes.

The final step in the development of sperm is called spermiogenesis. In this process, the spermatids formed from spermatogenesis become mature spermatozoa, or sperm. The mature sperm cell has a head, midpiece, and tail. The head, also called the nuclear region, contains the 23 chromosomes surrounded by a nuclear membrane. The tip of the head is covered by an acrosome, which contains enzymes that help the sperm penetrate the female gamete. The midpiece, metabolic region, contains mitochondria that provide adenosine triphosphate (ATP). The tail, locomotor region, uses a typical flagellum for locomotion. The sperm are released into the lumen of the seminiferous tubule and leave the testes. They then enter the epididymis where they undergo their final maturation and become capable of fertilizing a female gamete.

Sperm production begins at puberty and continues throughout the life of a male. The entire process, beginning with a primary spermatocyte, takes about 74 days. After ejaculation, the sperm can live for about 48 hours in the female reproductive tract.