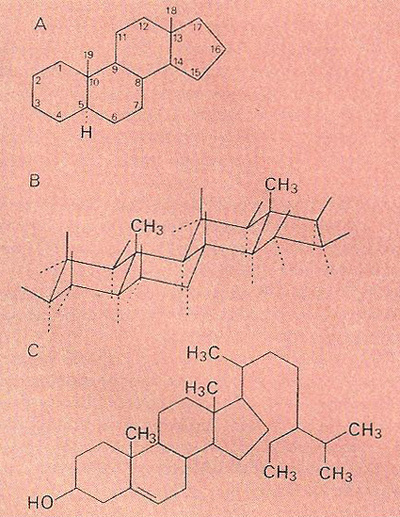 The steroid (cyclopentanoperhydrophenanthrene) nucleus: (A) structure and labeling of the carbon atoms; (B) conformational structure: hydrogen atoms are to be found at the end of each unlabeled spur bond. These bonds point either above the plane of the molecule (solid lines) or below (broken lines), while the hydrogen atoms are either equatorial (roughly in the plane of the carbon skeleton) or axial (lying above or below the skeletal plane); (C) Beta-sitosterol, a typical plant steroid. Side chains and substituent atoms (in this case the hydroxyl groupon carbon atom 3) are either alpha- or beta-, depending on whether their bonding points either below or above the plane of the carbon skeleton.

A steroid is any of a group of lipids derived from a saturated compound called cyclopentanoper-hydrophenanthrene. Steroids have a basic molecular structure of 15 carbon atoms arranged in four rings and bounded by up to 28 hydrogen atoms. Among the most important steroid derivatives are the steroid alcohols, or sterols, such as cholesterol. Other steroids include the bile acids, which aid digestion of fats in the intestine; the sex hormones (androgens and estrogens); and the corticosteroid hormones, produced by the adrenal cortex. Vitamin D is also based on the steroid structure. Synthetic steroids are widely used in medicine.