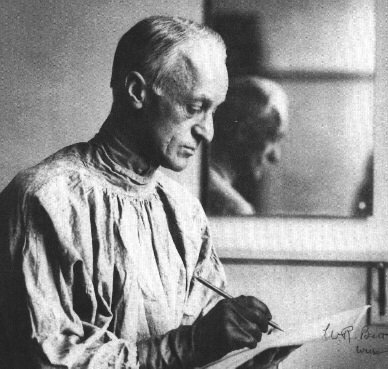 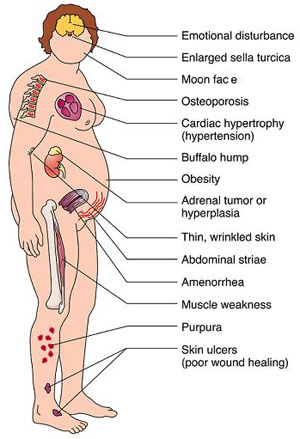 Cushing's syndrome is a hormonal disorder (see hormone) caused by prolonged exposure of the body's tissues to high levels of the hormone cortisol. Sometimes called hypercortisolism, Cushing's syndrome is relatively rare and most commonly affects adults aged 20 to 50. People who are obese (see overweight and obesity) and have type 2 diabetes, along with poorly controlled blood sugar and high blood pressure, have an increased risk of developing the disorder. The disease is named after the American surgeon Harvey Williams Cushing who first described it (Fig 1).

Harvey Cushing was a US surgeon who pioneered many modern neurosurgical techniques and investigated the functions of the pituitary gland. In 1932 he first described the condition produced by over-secretion of adrenal hormones that is now known as Cushing's syndrome. This rare syndrome is characterized by weight-gain in the face and trunk, high blood pressure, excessive growth of facial and body hair, demineralization of bone, and diabetes-like effects.

Signs and symptoms of Cushing's syndrome vary, but most people with the disorder have upper body obesity, a rounded face, increased fat around the neck, and relatively slender arms and legs. Children tend to be obese with slowed growth rates (Fig 2).

Other signs appear in the skin, which becomes fragile and thin, bruises easily, and heals poorly. Purple or pink stretch marks may appear on the abdomen, thighs, buttocks, arms, and breasts. The bones are weakened, and routine activities such as bending, lifting, or rising from a chair may lead to backaches and rib or spinal column fractures.

Women with Cushing's syndrome usually have excess hair growth on their face, neck, chest, abdomen, and thighs. Their menstrual periods may become irregular or stop. Men may have decreased fertility with diminished or absent desire for sex and, sometimes, erectile dysfunction.

Other common signs and symptoms include

Sometimes other conditions have many of the same signs as Cushing's syndrome, even though people with these disorders do not have abnormally elevated cortisol levels. For example, polycystic ovary syndrome can cause menstrual disturbances, weight gain beginning in adolescence, excess hair growth, and impaired insulin action and diabetes. Metabolic syndrome – a combination of problems that includes excess weight around the waist, high blood pressure, abnormal levels of cholesterol and triglycerides in the blood, and insulin resistance – also mimics the symptoms of Cushing's syndrome.

Cushing's syndrome occurs when the body's tissues are exposed to high levels of cortisol for too long. Many people develop Cushing's syndrome because they take glucocorticoids – steroid hormones that are chemically similar to naturally produced cortisol – such as prednisone for asthma, rheumatoid arthritis, lupus, and other inflammatory diseases. Glucocorticoids are also used to suppress the immune system after transplantation to keep the body from rejecting the new organ or tissue.

Other people develop Cushing's syndrome because their bodies produce too much cortisol. Normally, the production of cortisol follows a precise chain of events. First, the hypothalamus, a part of the brain about the size of a small sugar cube, sends corticotropin-releasing hormone (CRH) to the pituitary gland. CRH causes the pituitary to secrete adrenocorticotropic hormone (ACTH), which stimulates the adrenal glands. When the adrenals, which are located just above the kidneys, receive the ACTH, they respond by releasing cortisol into the bloodstream.

Cortisol performs vital tasks in the body including

One of cortisol's most important jobs is to help the body respond to stress. For this reason, women in their last 3 months of pregnancy and highly trained athletes normally have high levels of the hormone. People suffering from depression, alcoholism, malnutrition, or panic disorders also have increased cortisol levels.

When the amount of cortisol in the blood is adequate, the hypothalamus and pituitary release less CRH and ACTH. This process ensures the amount of cortisol released by the adrenal glands is precisely balanced to meet the body's daily needs. However, if something goes wrong with the adrenals or the regulating switches in the pituitary gland or hypothalamus, cortisol production can go awry.

Pituitary adenomas cause 70% of Cushing's syndrome cases, excluding those caused by glucocorticoid use. These benign, or noncancerous, tumors of the pituitary gland secrete extra ACTH. Most people with the disorder have a single adenoma. This form of the syndrome, known as Cushing's disease, affects women five times more often than men.

Some benign or, more often, cancerous tumors that arise outside the pituitary can produce ACTH. This condition is known as ectopic ACTH syndrome. Lung tumors cause more than half of these cases, and men are affected three times more often than women. The most common forms of ACTH-producing tumors are small cell lung cancer, which accounts for about 13% of all lung cancer cases, and carcinoid tumors – small, slow-growing tumors that arise from hormone-producing cells in various parts of the body. Other less common types of tumors that can produce ACTH are thymomas, pancreatic islet cell tumors, and medullary carcinomas of the thyroid.

In rare cases, an abnormality of the adrenal glands, most often an adrenal tumor, causes Cushing's syndrome. Adrenal tumors are four to five times more common in women than men, and the average age of onset is about 40. Most of these cases involve noncancerous tumors of adrenal tissue called adrenal adenomas, which release excess cortisol into the blood.

Diagnosis is based on a review of a person's medical history, a physical examination, and laboratory tests. X-rays of the adrenal or pituitary glands can be useful in locating tumors.

No single lab test is perfect and usually several are needed. The three most common tests used to diagnose Cushing's syndrome are the 24-hour urinary free cortisol test, measurement of midnight plasma cortisol or late-night salivary cortisol, and the low-dose dexamethasone suppression test. Another test, the dexamethasone-corticotropin-releasing hormone test, may be needed to distinguish Cushing's syndrome from other causes of excess cortisol.

Tests to find the cause of Cushing's syndrome

Once Cushing's syndrome has been diagnosed, other tests are used to find the exact location of the abnormality that leads to excess cortisol production. The choice of test depends, in part, on the preference of the endocrinologist or the center where the test is performed.

Treatment depends on the specific reason for excess cortisol and may include surgery, radiation, chemotherapy, or the use of cortisol-inhibiting drugs. If the cause is long-term use of glucocorticoid hormones to treat another disorder, the doctor will gradually reduce the dosage to the lowest dose adequate for control of that disorder. Once control is established, the daily dose of glucocorticoid hormones may be doubled and given on alternate days to lessen side effects. In some cases, noncorticosteroid drugs can be prescribed.

Several therapies are available to treat the ACTH-secreting pituitary adenomas of Cushing's disease. The most widely used treatment is surgical removal of the tumor, known as transsphenoidal adenomectomy. Using a special microscope and fine instruments, the surgeon approaches the pituitary gland through a nostril or an opening made below the upper lip. Because this procedure is extremely delicate, patients are often referred to centers specializing in this type of surgery. The success, or cure, rate of this procedure is more than 80 percent when performed by a surgeon with extensive experience. If surgery fails or only produces a temporary cure, surgery can be repeated, often with good results.

After curative pituitary surgery, the production of ACTH drops two levels below normal. This drop is natural and temporary, and patients are given a synthetic form of cortisol such as hydrocortisone or prednisone to compensate. Most people can stop this replacement therapy in less than 1 or 2 years, but some must be on it for life.

If transsphenoidal surgery fails or a patient is not a suitable candidate for surgery, radiation therapy is another possible treatment. Radiation to the pituitary gland is given over a 6-week period, with improvement occurring in 40 to 50% of adults and up to 85 percent of children. Another technique, called stereotactic radiosurgery or gamma knife radiation, can be given in a single high-dose treatment. It may take several months or years before people feel better from radiation treatment alone. Combining radiation with cortisol-inhibiting drugs can help speed recovery.

Drugs used alone or in combination to control the production of excess cortisol are ketoconazole, mitotane, aminoglutethimide, and metyrapone. Each drug has its own side effects that doctors consider when prescribing medical therapy for individual patients.

To cure the overproduction of cortisol caused by ectopic ACTH syndrome, all of the cancerous tissue that is secreting ACTH must be eliminated. The choice of cancer treatment – surgery, radiation, chemotherapy, immunotherapy, or a combination of these treatments – depends on the type of cancer and how far it has spread. Because ACTH-secreting tumors may be small or widespread at the time of diagnosis, making them difficult to locate and treat directly, cortisol-inhibiting drugs are an important part of treatment. In some cases, if other treatments fail, surgical removal of the adrenal glands, called bilateral adrenalectomy, may replace drug therapy.