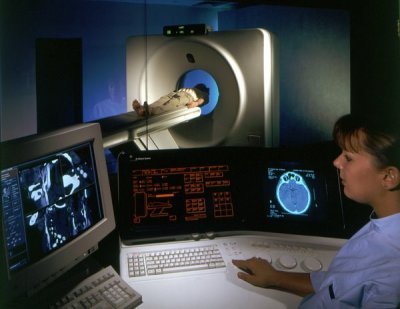 Computed tomography (CT) scanning – also known as computed axial tomography (CAT) scanning – is a medical diagnostic technique in which a computer combines the results of X-rays passed through the body at different angles to produce cross-sectional images ("slices") of the tissue being examined. CT scanning gives clearer and more detailed information than X-rays used by themselves. It also has the advantage of tending to minimize the amount of radiation exposure. See also X-rays in medicine.


The invention of computed tomography

Computed tomography was developed in 1972 by British engineer Godfrey N. Hounsfield at EMI Laboratories, England, and independently by South African born physicist Allan M. Cormack of Tufts University, Massachusetts. They shared the 1979 Nobel Prize in Physiology or Medicine. Hounsfield was also knighted in England for his contributions to medicine and science.


How a CT scanner works

In a CT scanner, an X-ray source rotates on a circular path around the patient and emits a fan-shaped beam of X-rays that passes through the body. Collimators are used to confine the beam to the slice that shall be imaged; its thickness can vary from less than one to several millimeters. Opposite to the X-ray source, sensitive detectors record the intensity of X-rays that have passed through the body. Based on the X-ray attenuations obtained from many different angles, a cross-sectional image of the body can be calculated.

Each pixel of the reconstructed image is assigned an X-ray attenuation value (also called a CT number) which is expressed in Hounsfield Units (HU). The Hounsfield scale is calibrated in a way that yields 0 HU for water and -1000 HU for air. CT numbers within one cross-section of the body can thus range from close to -1000 (e.g., the lungs) to several thousand HU (e.g., bone or metal).

Since the human eye can't distinguish a gray scale over such a wide range, adjustments (window "width" and window "level" or "center") are made when displayed the reconstructed images. The width value represents the range of CT numbers that are displayed on a gray scale. Each value below that range will be displayed black, each value above the range will be shown white. The "level" or "center" value determines the CT number around which the window is centered.


How a CT scan is performed

The patient lies on a narrow table that slides into the center of the CT scanner. Depending on the study being done, the patient may need to lie on his/her stomach, back, or side.

Once inside the scanner, the machine's X-ray beam rotates around the patient. Modern "spiral" scanners can perform the exam in one continuous motion.

Small detectors inside the scanner measure the amount of X-rays that pass through the part of the body being studied. A computer takes this information and uses it to create several individual images, called slices. These images can be stored, viewed on a monitor, or printed on film. Three-dimensional models of organs can be created by stacking the individual slices together.

The patient must be still during the exam, because movement causes blurred images. The patient may be told to hold his/her breath for short periods of time.

Generally, complete scans take only a few minutes. The newest multidetector scanners can image the entire body, head to toe, in less than 30 seconds.


How to prepare for a CT scan

Certain exams require a special dye, called contrast, to be delivered into the body before the test starts. Contrast can highlight specific areas inside the body, which creates a clearer image.

Contrast may be delivered using an intravenous line (IV) that is placed in a vein in the patient's hand or forearm. Contrast may also be given through the rectum using an enema, or as a liquid that the patient drinks before the scan. (When the contrast is drunk depends on the type of exam being done.) The contrast liquid may taste chalky, although some are flavored to make it taste a little better. The contrast eventually passes out of the body through the stools.

If contrast is used, the patient may also be asked not to eat or drink anything for 4–6 hours before the test.

If the patient weighs more than 300 lb, the patient's doctor should contact the scanner operator before the exam. CT scanners have a weight limit. Too much weight can cause damage to the scanner's working parts.

Since X-rays have difficulty passing through metal, the patient will be asked to remove jewelry and wear a hospital gown during the study.


How a CT scan feels

The X-rays are painless. Some people may have discomfort from lying on the hard table.

Contrast given through an IV may cause a slight burning sensation, a metallic taste in the mouth, and a warm flushing of the body. These sensations are normal and usually go away within a few seconds.

CT scans and other X-rays are strictly monitored and controlled to make sure they use the least amount of radiation. CT scans do create low levels of ionizing radiation, which has the potential to cause cancer and other defects. However, the risk associated with any individual scan is small. The risk increases as numerous additional studies are performed.

In some cases, a CT scan may still be done if the benefits greatly out weigh the risks. For example, it can be more risky not to have the exam, especially if the patient is suspected of having cancer.

An abdominal CT scan is usually not recommended for pregnant women, because it may harm the unborn child. Women who are or may be pregnant should speak with their health care provider to determine if ultrasound can be used instead.

The most common type of contrast given into a vein contains iodine. If a person with an iodine allergy is given this type of contrast, nausea, sneezing, vomiting, itching, or hives may occur. If a patient absolutely must be given such contrast, his/her doctor may choose to treat the patient with antihistamines (such as Benadryl) or steroids before the test. The kidneys help filter the iodine out of the body. Therefore, those with kidney disease or diabetes should receive plenty of fluids after the test, and be closely monitored for kidney problems. A patient with diabetes or are on kidney dialysis should talk to his/her health care provider before the test about your risks.

Rarely, the dye may cause anaphylaxis (a life-threatening allergic response). If the patient has trouble breathing during the test, he/she should notify the scanner operator immediately. Scanners come with an intercom and speakers, so the operator is able to hear the patient at all times.