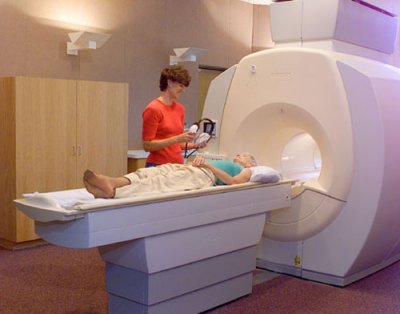 Magnetic resonance imaging (MRI) is a non-invasive medical diagnostic technique that gives high-quality cross-sectional or three-dimensional images of organs and structures within the body. Unlike X-rays and computed tomographic (CT) scans, which use radiation, MRI uses powerful magnets and radio waves.

During an MRI procedure, the patient lies inside a massive, hollow, cylindrical magnet. The spin axes of the nuclei (protons) of hydrogen atoms in the body normally point in random directions. In a magnetic field, however, these nuclei line up parallel to each other, like rows of tiny bar magnets. If the hydrogen nuclei are then knocked out of alignment by a strong pulse of radio waves, they produce a detectable radio signal as they fall back into alignment. Magnetic coils in the MRI machine detect these signals and a computer changes them into a cross-sectional or three-dimensional image based on the strength of signal produced by different types of tissue. Tissues that contain a lot of hydrogen (such as fat) produce a bright image; those that contain little or no hydrogen (such as bone) appear black. See also nuclear magnetic resonance.


Why MRI is done

Images from MRI are similar in many ways to those produced by CT scans, but MRI generally gives much greater contrast between normal and abnormal tissues. MRI is especially useful in studying the brain and spinal cord. White matter and gray matter, which are relatively poorly differentiated in CT scans, are distinct and well-defined in MRI scans. MRI provides clear images of tumors of the brain and spinal cord. Also shown clearly by MRI is the internal structure of the eye and ear.

MRI also produces detailed images of the heart and major blood vessels (see cardiac MRI), provides images of blood flow, and is useful for examining joints and soft tissues, particularly in the knee.


How an MRI is done

MRI is usually an outpatient procedure. You may be asked to wear a hospital gown or clothing without metal fasteners (such as sweatpants and a T-shirt). You will be asked to lie on a narrow table, which slides into the middle of the MRI machine. If you have a fear of confined spaces (claustrophobia), tell your doctor before the exam. You may be prescribed a mild sedative, or your doctor may recommend an "open" MRI, in which the machine is not as close to the body. During the procedure you must lie still.

Small devices, called coils, may be placed around the head, arm, or leg, or other areas to be studied. These devices help send and receive the radio waves, and improve the quality of the images.

Certain exams require that a special dye (contrast) be given before the test. The dye is usually given through an intravenous line (IV) in your hand or forearm. The contrast helps the radiologist see certain areas more clearly.

During the MRI, the person who operates the machine will watch you from a room next door. Several sets of images are usually need, each taking from 2 to 15 minutes. Depending on the areas being studied and type of equipment, the exam may take 1 hour or longer.


Preparing for the test

An MRI can be performed immediately after other imaging studies. Depending on the area of interest, the patient may be asked to fast for 4–6 hours prior to the scan. Other preparations are usually not needed.

The strong magnetic fields created during an MRI can interfere with certain implants, particularly pacemakers. Persons with cardiac pacemakers can not receive an MRI and should not enter an MRI area.

If you have any of the following metallic objects in your body, you should not get an MRI:

You will be asked to sign a consent form that says you do not have any of these items in your body.

Before an MRI, sheet metal workers or any person that may have been exposed to small metal fragments should receive a skull X-ray to check for metal in the eyes.

Because of the strong magnets, certain metallic objects are not allowed into the room.

• Items such as jewelry, watches, credit cards, and hearing aids can be damaged.
• Pins, hairpins, metal zippers, and similar metallic items can distort the images.
• Removable dental work should be taken out just prior to the scan.
• When the MRI magnet is turned on, pens, pocketknives, and eyeglasses may fly across the room. This can be dangerous, so such items are not allowed into the scanner area.


How the test feels

An MRI exam causes no pain. Some people may become anxious when inside the scanner. If you have difficulty lying still or are very anxious, you may be given a mild sedative. Excessive movement can blur MRI images and cause errors.

The table may be hard or cold, but you can request a blanket or pillow. The machine produces loud thumping and humming noises when turned on. Ear plugs are usually given to help reduce the noise.

An intercom in the scanner allows you to speak to the person operating the exam at any time. Some MRIs have televisions and special headphones that you can use to help the time pass.

There is no recovery time, unless sedation was necessary. After an MRI scan, you can resume your normal diet, activity, and medications.

There is no ionizing radiation involved in MRI, and there have been no documented significant side effects of the magnetic fields and radio waves used on the human body to date.

The most common type of contrast (dye) used is gadolinium. It is very safe. Allergic reactions to the substance rarely occur. The person operating the machine will monitor your heart rate and breathing as needed.

MRI is usually not recommended for acute trauma situations, because traction and life-support equipment cannot safely enter the scanner area and the exam can take quite a bit of time.

People have been harmed in MRI machines when they did not remove metal objects from their clothes or when metal objects were left in the room by others.