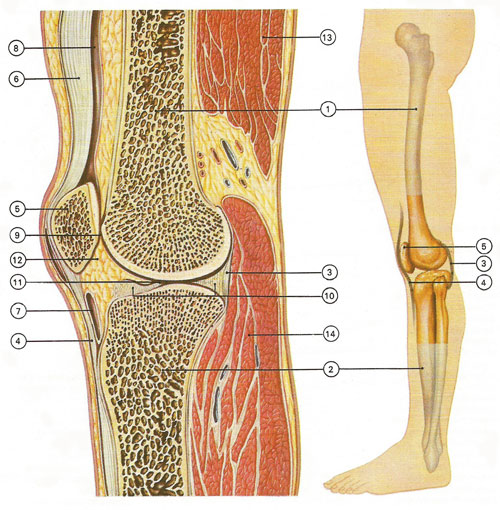 At the knee the femur (1) and tibia (2) are joined by ligament (3). Further ligaments (4), attached to the patella (5), form the tendon for the quadriceps muscle (6). The synovial membrane forms the infrapatellar (7) and suprapatellar (8) bursae. Cartilage (9) covers the articular surfaces and there are two crescents of cartilage (10) between the femur and the tibia. Synovial membrane and fluid (11) lubricate; fatty pads (12) pack the joint. Biceps (13) and gastrocnemius (14) muscles are shown. 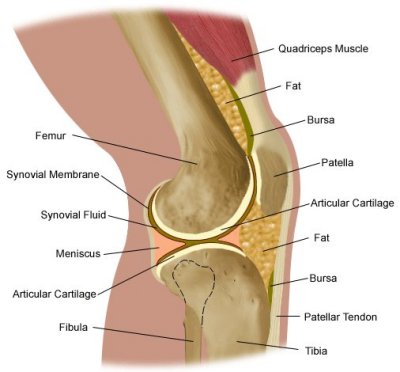 Cross-sectional view of the knee joint from the side. Credit: Lucile Packard Children's Hospital.

Ligaments of the left knee.

The knee is the joint between the femur (thigh-bone) and the tibia (shin-bone). A third bone, the patella (kneecap) lies across the front of the joint.

The knee is a modified hinge joint, which is capable of bending, straightening, and slight rotation in the bent position.


Cartilages of the knee

The articular surfaces of the knee bones are covered with hyaline cartilage which reduces friction between the bones. In addition the knee contains two cartilaginous tissues, known as the lateral meniscus and medial meniscus, that are wedged horizontally between the femur and the tibia. These menisci act as shock absorbers and also give structural integrity to the knee when it bends or twists. The menisci used to be called semilunar cartilages because of their half-moon shape. This old terminology often leads to confusion today. It is important to be clear, especially when discussing knee injuries with a doctor, that there is a big difference between the menisci and the hyaline cartilage that covers the ends of the femur and tibia.

The knee joint is partly surrounded by a fibrous capsule lined with synovial membrane – the largest in the body – which secretes a lubricating fluid.


Ligaments of the knee

There are four main ligaments in the knee. Two of these, the medial and lateral collateral ligaments, lie external to the knee joint, on the inner and outer side of the knee, respectively. They act to stabilize the knee's sideways motion. The other two main ligaments of the knee lie internal to the joint. These are the anterior and posterior cruciate ligaments, so-called because the cross over each other (the Latin crux means "cross") as they run diagonally between the femur and the tibia. The cruciate ligaments control the backward and forward motion of the knee. The anterior cruciate in particular restrains excessive forward motion of the knee as well as the inward twisting or rotation of the knee.


Other structures associated with the knee

Fluid-filled sacs called bursas are situated above and below the patella and behind the knee. The quadriceps muscles (which run along the front of the thigh) straighten the knee; the hamstring muscles at the back of the thigh bend the knee.