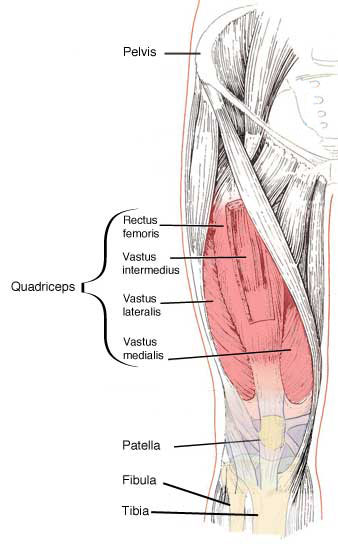 The quadriceps femoris has four main portions: the rectus femoris, which is in the anterior part of the thigh, and is quite distinct from the others, except at its insertion, the vastus lateralis, the vastus intermedius, and the vastus medialis, which clothe the front and sides of the shaft of the femur, and are more or less blended with one another. The vasti and the rectus are all supplied by the femoral nerve.

The rectus arises by two tendinous heads. The straight head springs from the anterior inferior iliac spine. The reflected head arises, under cover of the gluteus minimus, from a marked impression on the ilium immediately above the acetabulum.

The two heads of origin of the rectus femoris joint at a right angle immediately beyond the margin of the acetabulum, and form a strong, flattened tendon, which gives place to a fusiform, fleshy body. The tendon of origin spreads out on the anterior surface of the upper part of the muscle in the form of an aponeurosis. About three inches above the knee joint, the rectus femoris ends in a strong tendon of insertion which is prolonged for some distance upward on its deep surface in the form of an aponeurosis. As it nears the knee the tendon of the rectus femoris joins the other tendons of the quadriceps, and forms with them a common tendon which is inserted into the upper border of the patella.

This forms the greater part of the fleshy mass on the lateral side of the thigh. Its superficial stratum is a glistening aponeurosis. It overlaps the vastus intermedius, and is partly blended with that muscle, its anterior border is therefore ill-defined, and the descending branch of the lateral circumflex artery is the best guide to it.

The vastus lateralis has a long, linear origin from the root of the greater trochanter and the back of the femur down to the supracondylar ridge. The fleshy fibers are, for the most part, directed downward and forward. By means of the common tendon of insertion the muscle gains attachment to the patella, and, at the same time, gives an expansion to the capsule of the knee joint.

The vastus medialis is intimately connected with the vastus intermedius, but they are seldom fused together. It has a long linear origin chiefly from the trochanteric and spiral lines and the linea aspera; and it should be noted that so few muscle bundles arise from the medial surface of the femur that it is almost bare. The fleshy fibers are directed downward and forward, and end in the common tendon of the quadriceps muscle, which is inserted into the patella and becomes connected with the capsule of the knee joint.

The vastus intermedius covers and arises from the anterior and lateral surfaces of the shaft of the femur. It is inserted into the patella by means of the common tendon.


Disorders of the quadriceps muscle

The most common quadriceps disorder is a hematoma due to a direct blow. Bruising may follow after a few days. Rarely, bone forms in the hematoma, and this restricts movement.

Sudden stretching of the leg may tear the muscle, especially in middle-aged or elderly people. Rupture of the quadriceps tendon can be caused by a direct blow to the leg or stumbling. Knee disorders that cause pain or swelling, limiting full extension of the leg, cause the muscle to begin to waste away within 48 hours, making the knee feel as if it is giving way when weight is placed on the affected leg. Exercises to strengthen the quadriceps are used to treat certain knee disorders.