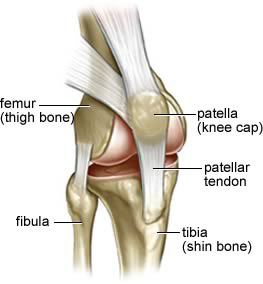 
Disorders of the patella

Dislocation of the patella is usually due to a congenital (inherited) abnormality, such as an underdevelopment of the lower end of the femur (thigh bone) or excessive looseness of ligaments that support the knee.

Inflammation and roughening of the undersurface of the patella, resulting in knee pain that worsens when bending the knee or climbing stairs, is caused by chondromalacia patellae in adolescence and by arthritis in adults.

Reflex contraction of the quadriceps muscle so that the leg kicks, elicited in a patient sitting with one knee crossed over the other by sharply tapping the tendon of the muscle below the kneecap. The reflex is mediated through nerves emanating from the third and fourth lumbar spinal levels (see spinal nerve). This is a test of the connection between the sensory nerves attached to stretch receptors in the muscle, the spinal cord, and the motor neurons running from the cord to the thigh muscle, all of which are involved in the reflex. The patellar reflex is reduced or absent when there is disease or damage of the spinal cord at or below the level of the reflex and exaggerated in disorders above the level of the reflex.