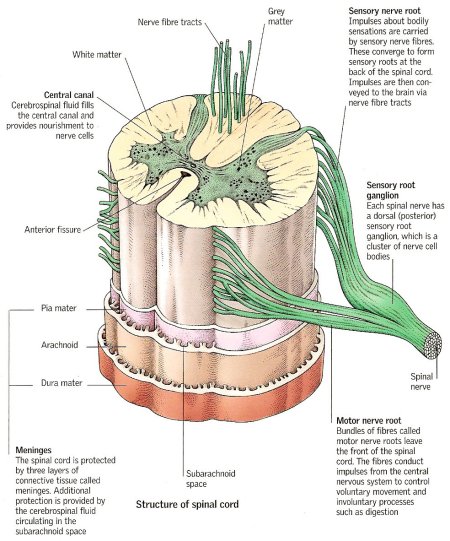 Fig 2. Structure of the spinal cord.

The spinal cord is a thick, whitish cylinder of nerve tissue that runs down the central canal of the spinal column. It is an extension of the brain, and together with the brain forms the central nervous system.

The spinal cord originates at the lower (inferior) end of the medulla oblongata, at the bottom of the brainstem. It leaves the skull by way of a large opening called the foramen magnum, and extends about two-thirds of the way down the spine, as far as the first lumbar vertebra.

The spinal cord is unique to the nervous system of vertebrates. In an adult human it is about 45 cm (18 in) long and roughly as thick as a finger. Spinal nerves from the spinal cord branch off to various parts of the body.


Divisions of the spinal cord

The are five divisions of the spinal cord, corresponding to the different groups of vertebrae:

Structurally, the spinal cord is a double-layered tube, roughly cylindrical in cross section, though the diameter varies at different vertebral levels (Fig 2).

There are two enlargements, the cervical and the lumbar. The cervical enlargement is due to the cord segments from C3 to T1 and innervates the upper limbs via the brachial plexus. The lumbar enlargement arises from segments L1 to S3 and innervates the lower limbs via the lumbar and sacral plexuses. The spinal cord proper ends at the level of L1. It terminates at a conical point known as the conus medullaris, from which a strand of connective tissue, the filum terminale, extends caudally and attaches to the dorsal surface of the first cocygeal vertebra.

The outer layer of the spinal cord consists of white matter, i.e., myelin-sheathed nerve fibers. These are bundled into specialized tracts that conduct impulses triggered by pressure, pain, heat, and other sensory stimuli or conduct motor impulses activating muscles and glands. The inner layer, or gray matter, has a butterfly-shaped cross-section and is mainly composed of nerve cell bodies. Within the gray matter, running the length of the cord and extending into the brain, lies the central canal through which the cerebrospinal fluid circulates. Three protective membranes, known as the meninges, wrap the spinal cord and cover the brain – the pia mater is the innermost layer, the arachnoid lies in the middle, and the dura mater is the outside layer, to which the spinal nerves are attached.