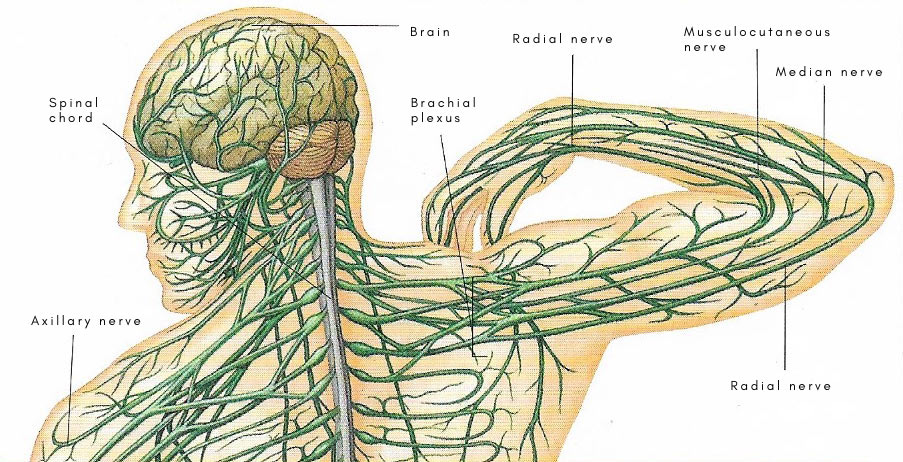 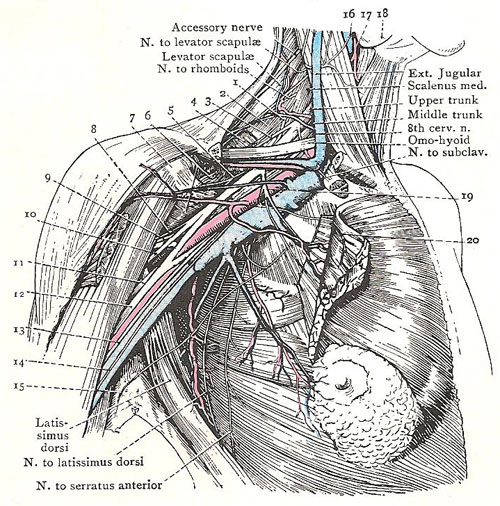 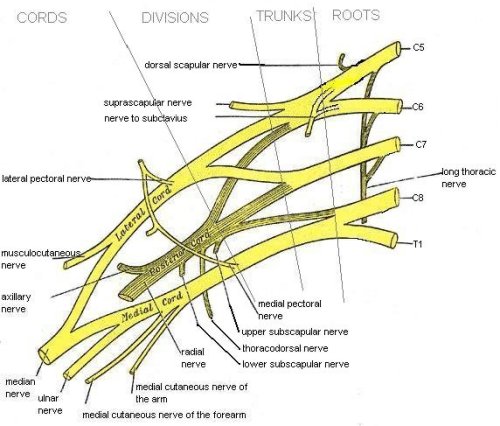 Anterior view of right brachial plexus.
Based on illustration from Gray's Anatomy.

The brachial plexus is a collection of large nerve trunks that pass from the lower part of the cervical spine (in the neck) and the upper part of the thoracic spine (in the chest) down the arm. The nerve trunks of the brachial plexus divide into the musculo-cutaneous and axillary, median, ulnar, and radial nerves which both control muscles in and receive sensations from the arm and hand.

This important plexus lies behind the clavicle and in the upper part of the axilla. The portion of the brachial plexus that lies behind the clavicle varies with the position of the body, for the clavicle is nearly horizontal in the standing and sitting position, while, in the recumbent position, its lateral end is considerably higher than the medial end. The plexus begins, by the union of roots, at the lateral margin of the scalenus anterior, opposite the lower third of the posterior border of the sternomastoid; it ends in the axilla, by breaking up into the large nerves of the upper limb.

The parts of the plexus are roots, trunks, divisions, cords, and branches.

The roots of the plexus are the anterior primary rami of the lower four cervical and first thoracic nerves, with small contributions from the fourth cervical and second thoracic. The roots form three trunks (upper, middle, and lower). The fifth and sixth nerves, and the twig from the fourth unite to form the upper trunk. The seventh alone forms the middle trunk. The eighth cervical and first thoracic, with the twig from the second thoracic, unite to form the lower trunk.

In the neck, the plexus is closely related, posteriorly, to the fascia of the scalenus medius, the lower trunk lying above the first rib between the muscle of the subclavian artery. The roots of the nerve to the serratus anterior descend under cover the plexus, between it and the scalenus medius.

Anteriorly, a large number of structures intervene between the plexus and the skin: (1) The superficial fascia containing the platysma and the intermediate supraclavicular nerves. (2) The deep fascia and the clavicle. (3) The external jugular and other veins, and the suprascapular artery. (4) The inferior belly of the omohyoid, the transverse cervical artery, and the nerve to the subclavius. (5) The third part of the subclavian artery.

In the axilla, the cords are first placed close together above, behind, and lateral to the first part of the axillary artery, and then are grouped round the second part in the positions indicated by their names – lateral, medial, posterior.

The branches of the plexus arise from the roots of the neck and from the cords in the axilla.

The roots receive communicating branches from the sympathetic trunk, and they give off muscular branches. Gray rami communicantes pass from the middle cervical ganglion of the sympathetic trunk to the fifth and sixth nerves; from the inferior ganglion to the seventh and eighth nerves; from the first thoracic ganglion to the first thoracic nerve. The muscular branches are: (1) Twigs to the scalene muscles and to the longus cervicus; (2) a root of the phrenic nerve from the fifth; (3) four nerves which supply muscles of the upper limb, namely, the suprascapular nerve, the nerve to the rhomboids, the nerve to the subclavius, and the nerve to the serratus anterior.

The nerve to the subclavius is a slender nerve that arises at the point where the fifth and sixth cervical nerves unite to form the upper trunk of the plexus. It runs downward near the scalenus anterior, in front of the brachial plexus and the subclavian vessels, to enter the back of the subclavius muscle behind the clavicle. It frequently sends a branch on to the surface of the scalenus anterior to join the phrenic nerve; this branch replaces the root of the phrenic from the fifth.

The suprascapular nerve arises from the fifth and sixth cervical nerves at their junction. It runs downwards and backwards, on the scalenus medius, immediately above the brachial plexus. Reaching the posterior angle of the triangle, it falls in with suprascapular artery, and descends with it to the scapula to supply the supraspinatus and infraspinatus muscles and the shoulder joint.

The nerve to the serratus anterior arises by three roots from the back of the fifth, sixth, and seventh nerves; in their course in the neck, these roots are hidden behind the brachial plexus. The roots from the fifth and sixth nerves descend through the substance of the superficial part of the scalenus medius, and, emerging from it near its lateral border, unite to form one stem which passes into the axilla between the upper border of the serrastus anterior and first part of the axillary artery. The root from the seventh descends over the surface of the scalenus medius, crosses the upper border of the serratus close by the medial side of the other part and joins it in the axilla.


Injury to the brachial plexus

Injury is usually a forcible separation of the neck and shoulder, due to a fall pushing downwards or to a blow to the side of the neck that stretches or tears upper nerve roots in the plexus. Damage to these roots causes paralysis in muscles of the shoulder and elbow.

Injury to lower nerve roots in the plexus, causing paralysis of muscles in the forearm and hand, can result from a forcible blow that lifts the arm and shoulder upwards.

In severe injuries, both the upper and lower nerve roots of the brachial plexus are damaged, producing complete paralysis of the arm.

Paralysis may be temporary if the stretching was not severe enough to tear nerve fibers.

Treatment of a brachial plexus injury depends on the extent and severity of nerve damage. Possible investigational procedures include EMG (electromyography) to demonstrate which nerves are still intact, and myelography (X-ray examination of the spinal cord after injection of a contrast medium).

Nerve roots that have been torn can be repaired by nerve grafting, a microsurgery procedure often performed with good results. However, is a nerve root has become separated from the spinal cord, surgical repair will not be successful.

In the event of permanent paralysis of a particular group of muscles in the arm, function can be improved by a muscle or tendon transfer operation to provide an alternative structure to perform a particular movement. Physiotherapy, with exercises continued at home, helps restore function after a successful nerve graft operation and can also help to reduce contractures in paralyzed muscles.

Apart from injuries, the brachial plexus may be affected by the presence of a cervical rib (extra rib), infections, tumors, or aneurysms.