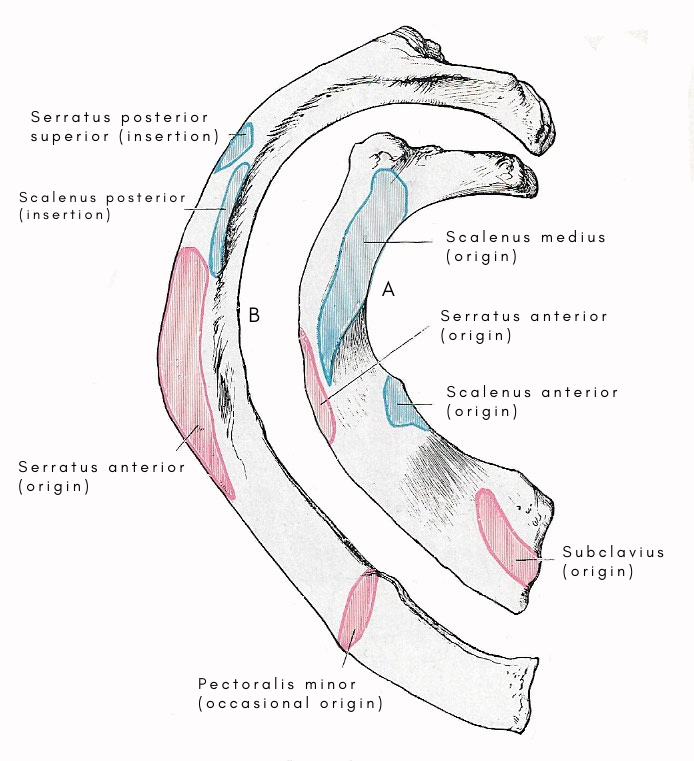 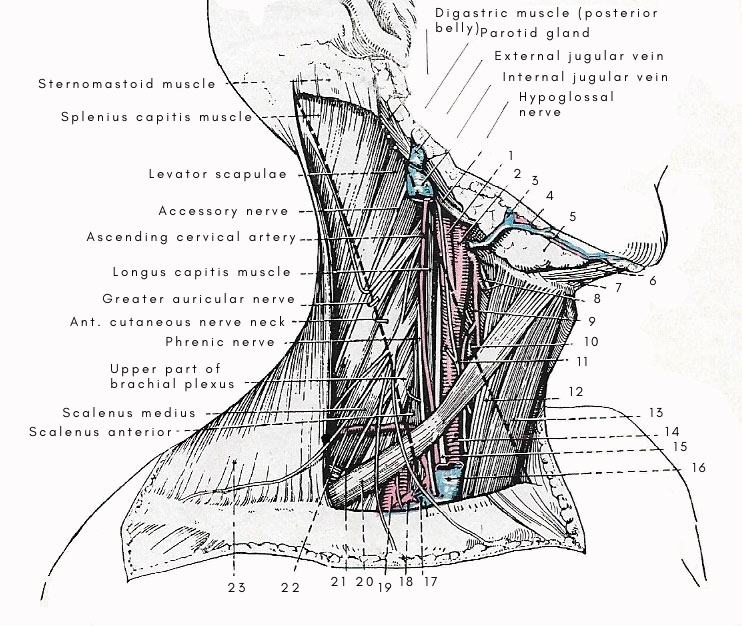 The scalene muscles are a set of three muscles in the neck that extend from the cervical transverse processes to the upper two ribs. They are named for their relative positions: anterior, medius, and posterior. They are supplied by twigs from the anterior primary rami and the lower five or six cervical nerves. Acting from below, they bend the neck sideward and forward; acting from above, they elevate the first two ribs in forced inspiration.

Thw scalenus anterior is related to a large number of structures in the root of the neck. The upper part of the anterior surface is concealed by the sternomastoid, and the lower part by the clavicle. Thw common carotid artery ascends along its medial border. Between it and the sternomastoid there are: (1) the internal jugular vein; (2) the inferior belly of the mohyoid; (3) the phrenic nerve; and the (5) anterior jugular vein. The subclavian vein lies between it and the clavicle.

Its posterior surface is in relation, above, with the tips of the lower cervical trunk and the inferior thyroid artery.

The scalenus medius is much larger and more powerful than the scalenus anterior. It arises from the posterior tubercles of all the cervical transverse processes (with the occasional exception of the first), and is inserted into a rough, oval impression which marks the upper surface of the first rib between the tubercle of the rib and the groove for the subclavian artery.

It forms part of the floor of the posterior triangle of the neck. Its superficial surface is in relation with the brachial plexus and the third part of the subclavian artery. Its posterior border touches the levator scapulae; and the nerve to the rhomboids and the deep branch of the transverse cervical artery pass between it and that muscle. The upper two roots of the nerve to the serratus anterior pierce the substance of the muscle; and the lower part of the anterior border is in relation with the apex of the pleura.

This small muscle is generally inseperable, in its upper part, from the scalenus medius. It springs by two or three slips from the transverse processes of the lower cervical vertebrae, and is inserted into the upper border of the second rib, behind the large rough area which marks the origin of the serratus anterior.