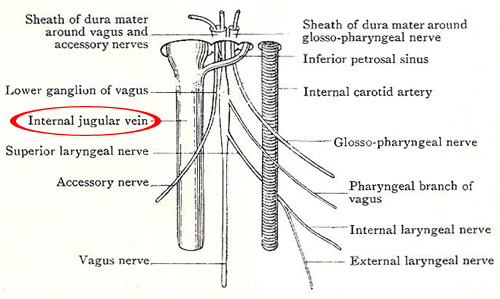 The internal jugular vein is the widest of the jugular veins, and the longest vein in the neck. It begins in the jugular foramen as the continuation of the sigmoid sinus (which is continuous with the transverse sinus); it descends vertically in the neck along the lateral side of the internal and common carotid arteries, enclosed with them and the vagus in the carotid sheath of fascia; it ends behind the medial part of the clavicle by uniting with the subclavian vein to form the innominate vein. In the lower part of the neck, both veins trend to the right. The left vein therefore overlaps the common carotid considerably, while the right vein recedes from it.

Its commencement shows a considerable dilatation called the upper bulb of the jugular vein. The bulb is accommodated in the jugular fossa of the skull, and its lumen is always patent because its walls are adherent to the margins of the fossa. At the lower end of the vein there is a smaller dilatation called the lower bulb; and either above or below or below it (sometimes both) there is a valve of two or three cusps.

The right and left internal jugular veins are seldom of equal width – the right being usually the wider. The transverse and sigmoid grooves are wider on the side of the skull to which the superior sagittal sinus turns; and, on that side, the jugular foramen, fossa, vein, and bulb are all wider than on the other.

At its upper end, the vein is posterolateral to the internal carotid, and is partly separated from it by the last four cranial nerves. As it descends, it assumes a more direct lateral relationship, first to the internal carotid and then to the common carotid, and slightly overlaps them anteriorly. The vagus is still between the vein and the arteries, but rather on a posterior plane.

The superficial relations of the vein in the upper part of its extent are the styloid process with the stylopharyngeus and stylohyoid muscles, and the posterior belly of the digastric, which separate it from the upper part of the parotid gland. In that part of its extent it is crossed by the accessory nerve, running downwards and backwards. At a slightly lower level it is crossed by a sternomastoid branch of the occipital artery. Below the parotid and digastric, it disappears almost at once under cover of the sternomastoid. It is, however, separated from the sternomastoid by a number of structures: (1) Numerous lymph glands along its whole course. (2) The descendens cervicalis nerve, at the level of the thyroid cartilage. (3) The sternomastoid branch of the superior thyroid artery, the intermediate tendon of the omohyoid, and the nerve to the inferior belly of the onohyoid, at the level of the cricoid. (4) In its lower part, the anterior jugular vein, the sternohyoid and sternothyroid muscles.

Posteriorly, it lies on the transverse processes, the muscles attached to them, the cervical plexus and its branches; at a lower level, on the thyrocervical trunk and its branches – overlapping the phrenic nerve and the scalenus anterior; and, finally, it lies on the subclavian artery and the pleura. The thoracic duct crosses behind the left vein in the root of the neck.