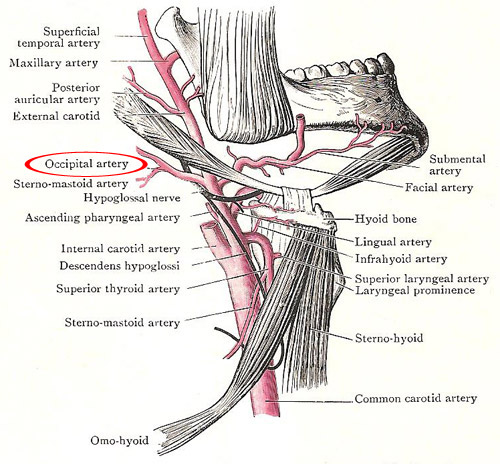 The occipital artery in relation to the external carotid and its branches.

The first part of the occipital artery crosses the internal carotid artery, the hypoglossal nerve (which hooks round it), the accessory nerve, and the internal jugular vein.

The second part of the artery is at first deeply placed under cover of the mastoid process and the muscles attached to it, including the posterior belly of the digastric. Occasionally it is superficial to the longissimus). Having emerged from under cover of them, it crosses the apex of the posterior triangle to disappear under the trapezius, which it pierces about an inch lateral to the occipital protuberance.

The branches of the first part of the occipital artery are: (1) muscular twigs, one of which accompanies the accessory nerve to the sternomastoid; and (2) a meningeal branch that runs up on the surface of the internal jugular vein, and enters the skull through the jugular foramen.

The branches of the second part of the occipital artery are a mastoid branch, which enters the mastoid foramen to supply the bone and the dura mater, and muscular branches.

One of the muscular branches is a fairly large artery which runs downwards among the muscles of the back of the neck as a descending branch.