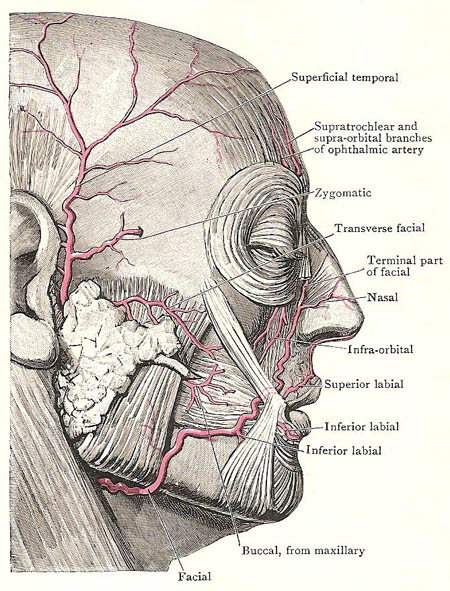 Arteries of the face.

The facial artery is by far the largest artery of the face. It arises in the neck from the external carotid artery. It enters the face at the lower and anterior angle of the masseter, after turning round the border of the mandible and piercing the deep fascia of the neck.

In the face, the facial artery runs forward and upward to a point about half an inch from the angle of the mouth, and then ascends more vertically, in the substance of the levator labii superioris alaeque nasi, to end near the medial of the eye. Until it enters the substance of that muscle, it is under cover of the platysma, risorius, and levator labii superioris; and it lies first on the mandible, next on the buccinator, and then on the levator anguli oris. As it crosses the mandible, its pulsations can be felt and it can be compressed against the bone.


Other arteries of the face

The transverse facial artery is a small vessel that arises from the superficial temporal artery in and under cover of the parotid gland; it escapes from the gland near its upper end, and runs forwards over the masseter muscle below the zygomatic arch.

There are also numerous other arteries which accompany branches of the trigeminal nerve into the face and receive corresponding names. They anastomose freely with one another, so that there is a network of arteries in the face.