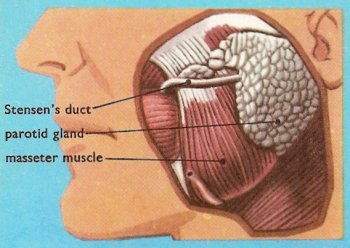 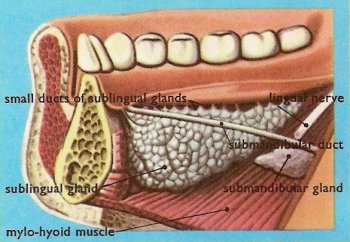 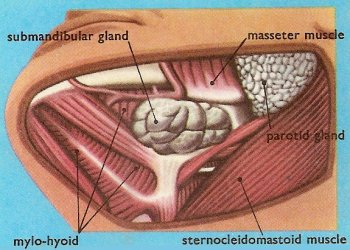 Three pairs of major salivary glands (parotid, sublingual, and submandibular glands) and numerous smaller ones secrete saliva into the mouth (oral cavity), where it is mixed with food during mastication. The principal constituents of saliva are water, mucus, buffers, enzymes (e.g., amylase) and some gamma globulins.

Functions of saliva include the following:


Structure of the salivary glands

The salivary glands are solid structures composed of millions of secretory cells. Between the cells run tiny ducts which collect the saliva and channel it into a single, much larger, duct. This large duct carries the saliva away from the gland and into the mouth.


Position of the salivary glands

The position of each of the three pairs of large salivary glands is indicated by their names. Parotid means "near the ears"; sublingual means "under the tongue"; and submandibular means "under the mandible" (that is, under the jaw-bone).

The parotid glands are the largest of the salivary glands. They lie just under the skin, one in front of each ear (Fig 2).

The saliva from each parotid gland is carried to the mouth in a small vessel called Stensen's duct. If you look carefully inside your own mouth you may be able to see the orifice (opening) of this duct on the inside of your cheek, just opposite the crown of the upper second molar tooth.

The sublingual glands are the smallest of the salivary glands. They lie in the floor of the mouth underneath the tongue (Fig 3).

The special feature of these glands is that, instead of having a single large duct like the parotid and submandibular glands, they have a whole row of much smaller ducts. These ducts open into the mouth along the top of the little transverse ridge which is on the floor of the mouth under the tongue.

The name of this salivary gland is a bit confusing because the gland does not, in fact, lie under the mandible, but instead in a small depression on the medial surface of that bone (Fig 4). This depression is called the submandibular fossa.

Each submandibular gland has a duct which runs forward through the structures in the floor of the mouth, and opens by an easily seen orifice at the base of the frenulum of the tongue.


Disorders of the salivary glands

The parotid glands can be infected with the mumps virus, and stones (calculi) can form in a salivary gland or duct. A stone in a duct causes a swelling that enlarges during eating because saliva flow is blocked; it can also cause pain. Surgical removal of a stone from a duct is usually straightforward, but if the stone is within the gland, the entire gland may have to be removed. Poor oral hygiene may allow bacterial infection in a gland, sometimes leading to an abscess. Tumors may develop; however, they are rare except for a type of parotid tumor that is slow-growing, noncancerous, and painless.

Insufficient salivation causes a dry mouth. This problem may be due to dehydration or Sjogren's syndrome, or it may occur as a side effect of certain drugs.