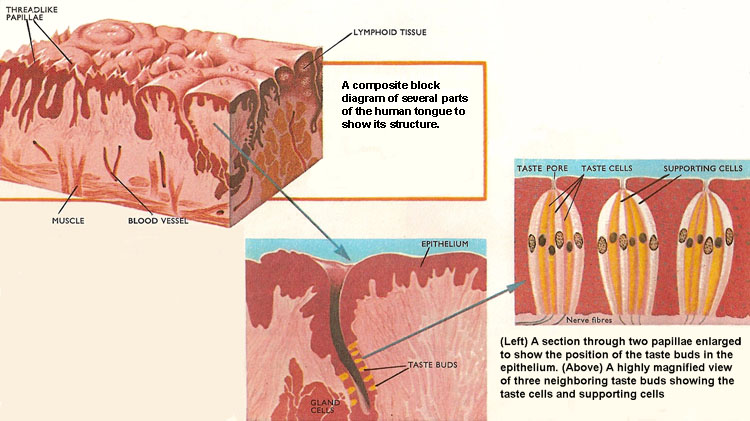 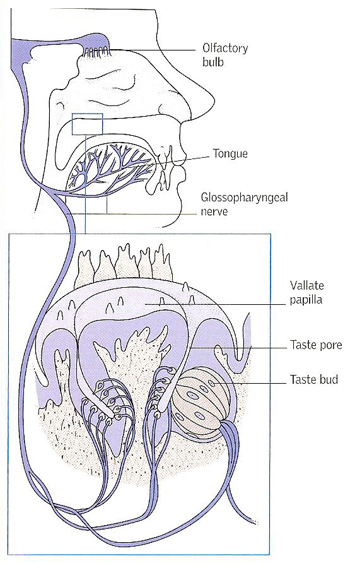 How a substance is tasted. Chemicals in food or drink dissolve in saliva and enter pores in the papillae on the tongue. Around these pores are groups of taste receptor cells – the taste buds. The chemicals stimulate hairs projecting from the receptor cells, causing signals to be sent from the cells along nerves to taste centers in the brain.

Taste is one of the five traditional senses (though there are many others); like the sense of smell it uses receptors called chemoreceptors which are sensitive to chemicals. Taste receptors occur mainly on the tongue with a few elsewhere in the mouth and pharynx, and on the epiglottis (the flap of tissue that prevents food from passing down the trachea (wind-pipe)).

Small projections, called papillae, on the tongue have flask-shaped taste buds scattered over them. These consist of groups of about 100 specialized cells that have nerve fiber endings between them and wrapped round them. When the taste buds are stimulated, signals pass along the nerve fibers to the medulla. The taste buds are moistened by the saliva and by the fluids released by special glands in the tongue. An essential feature of both taste and smell receptors is that the chemical must pass into solution before it can stimulate the receptor. During dry cold weather the senses of taste and smell may be very much reduced.

Four categories of taste have long been recognized in the West – sweet, salty, sour, and bitter – to which can be added the Eastern traditional taste of umami (savory), and others, more recently identified, such as metallic. It is a myth, based on a mistranslation of an old German text, that different parts of the tongue are specializing in detecting different tastes, i.e., that there is a "taste map" of the tongue. In fact all of the taste sensations are detected by all parts of the tongue and other taste-sensitive regions of the oral cavity, with only minor differences in sensitivity to different substances from one place to another. Every taste bud has the ability to respond to all of the basic types of taste.


Relationship between taste and smell

Though the taste receptors are sensitive to minute amounts of chemicals the smell receptors can detect even smaller quantities. The basic tastes are inborn – automatic responses to particular chemical substances. This is perhaps reflected in the fact that the nerve fibers from the taste receptors pass to the medulla. In contrast the sense of smell depends largely on the store of past experiences (memory) and the nerves pass directly to the cerebrum. It is of interest that this highest region of the brain has evolved from the olfactory parts of the brain (those concerned with smell) of lower vertebrates.