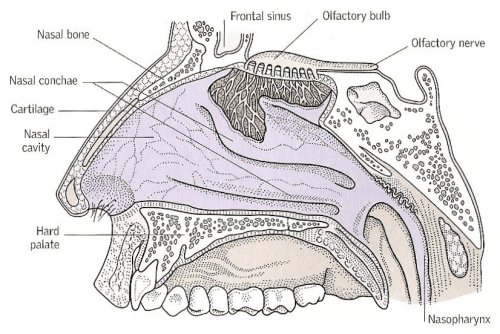 Sagittal section of the nose. 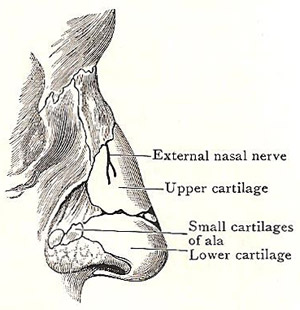 Cartilages of the external nose.

The nose is part of the olfactory system (associated with the sense of smell) and one of the openings of the respiratory system (the other being the mouth). It consists essentially of an air passage connecting the nostrils at the front to the nasopharynx (the upper part of the throat) at the back.

The external part of the nose is a partly fibrocartilaginous triangular pyramid which projects from the center of the face immediately above the upper lip. Its summit or root is connected with the forehead by means of a narrow bridge, formed on either side by the nasal bone and the nasal process of the superior maxilla. Its lower part presents two horizontal elliptical openings, the nostrils, which overhang the mouth, and are separated from one another by a vertical partition called the septum nasi. The margins of the nostrils usually have a number of stiff hairs (vibrissae), which project across the openings, and serve to impede the passage of foreign substances, such as dust, small insects, etc, which might otherwise be drawn up with the current of air intended for respiration.

The skeleton or framework of the nose is partly composed of the bones forming the top and sides of the bridge and partly of cartilages, there being on either side an upper lateral and a lower lateral cartilage, to the latter of which are attached three or four small cartilaginous plates, called sesamoid cartilages. There is also the cartilage of the septum which separates the nostrils, and in association posteriorly with the perpendicular plate of the ethmoid, and with the vomer, forms a complete partition between the right and left nasal fossae.

The nasal cavity is divided into right and left halves by the septum nasi. The two cavities open externally at the nostrils or external nares and behind into the nasopharynx or the posterior nares. The side wall of each cavity is marked by three ridges: the superior, middle, and inferior conchae, the substance of each of which is a fragile scrolled turbinate bone; and beneath each turbinate is a recess or meatus.

The accessory nasal air sinuses open into one or other meatus, the maxillary antrum into the middle meatus, and the frontal sinus by a more complicated channel. The nasal mucous membrane is continuous with that of the sinuses. The smell-sensitive region is on the roof of each cavity, where the mucosa contains the olfactory cells whose fibers make up the first cranial nerve – the olfactory nerve.


Muscles of the nose

These muscles are small and unimportant. They are: (1) the procerus, (2) a portion of the levator labii superioris alaeque nasi, (3) the compressor naris, (4) the dilator naris, and (5) the depressor septi nasi – little slips inserted from below into the ala and septume, respectively.