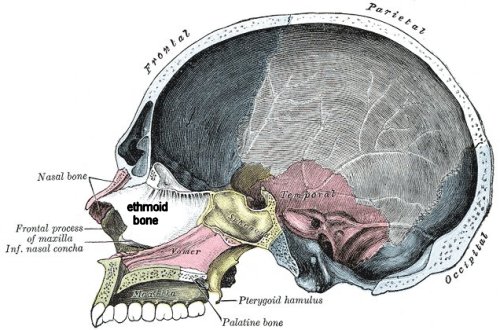 The ethmoid bone is an irregularly shaped bone of the skull which lies between the orbital plates of the frontal bone and anterior to the sphenoid bone.

The ethmoid bone consists of two lateral masses of thin plates enclosing air cells called ethmoid sinuses. The bone is attached above to a perforated horizontal lamina called the cribriform plate, from which descends a median vertical or perpendicular plate in the space between the two lateral masses.

The ethmoid articulates (joins) with the sphenoid, frontal, maxillary, lacrimal, and palatine bones, the inferior nasal concha, and the vomer. It also enters into the formation of the anterior cranial fossa, the orbits, and the nasal cavity.

The ethmoid sinuses are among several air-filled cavities situated in the skull bones around the nose and eyes that serve to lighten the skull bones. Mucus produced in the liming of the sinuses traps small airborne particles and moistens inhaled air as it passes through the airways.