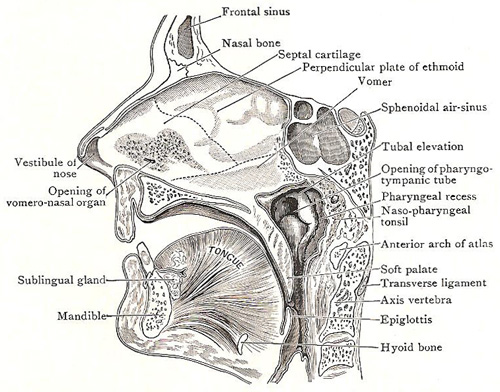 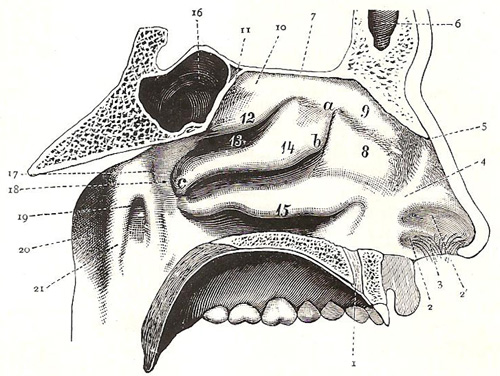 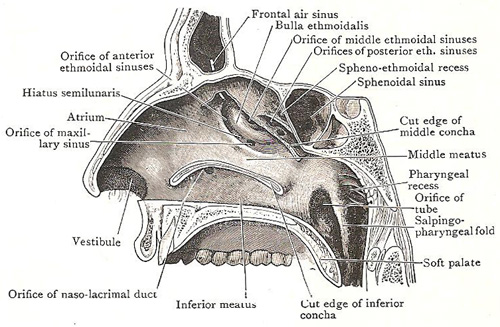 Lateral wall of nasal cavity and nasopharynx. The three conchae have been removed.

The nasal cavity is either of the two cavities lying between the floor of the cranium (see skull) and the roof of the mouth and extending from the face to the pharynx.

The cavity, as a whole, is divided by the septum nasi into a right and left half, and each half may be spoken of as a cavity of the nose. Each cavity is about 5 cm (2 in) high and 5–7.5 cm (2–3 in) long; but it is narrow from side to side, measuring half an inch or less at the floor, and only one or two millimeters at the roof. Its width is further reduced by the conchae, which project into the cavity from the lateral wall.

Each nasal cavity presents a medial wall formed by the septum, a lateral wall, a roof, a floor, and an anterior and a posterior aperture.

The anterior apertures, or nostrils, are a pair of oval orifices which open upon the face and look downward. The posterior apertures open into the nasopharynx and look backward and downward.

The floor of the nose is about 5 cm (2 in) long and barely 1.25 cm (0.5 in) wide. It is formed by the palatine process of the maxilla and the horizontal part of the palatine bones; it is concave from side to side, and is slightly higher in front than behind.

The lateral wall of each nasal cavity is very uneven owing to the projection of the three conchae. It is separable into three areas: (1) the vestibule, (2) the atrium of the middle meatus; (3) the region of the conchae and the intervening meatuses.

The vestibule of the nose is the part immediately above the nostril, and its size and shape can be altered by the contraction of the nasal muscles. Its walls are lined with skin from which the stiff hairs called vibissae grow. The anterior hairs incline backward; the posterior hairs incline forward; thus, the entrance into the nose is guarded by a filter-like arrangement of hairs.

The atrium of the middle meatus is above and slightly behind the vestibule, and immediately in front of the middle meatus. Its lateral wall is slightly concave: and at its upper part, near the nasal bone, a slight elevation termed the agger nasi may be present running downward and forward. It represents an additional concha which is present in some mammals.

Behind the vestibule and the atrium is the region of the conchae and the meatuses. The conchae are three curled bony plates that project into the cavity from the side wall and curve downward. They are covered with thick mucous membrane. The upper two are processes of the ethmoid; the lower concha is an independent bone.

The superior concha is very short, and is placed on the upper and posterior part of the lateral wall of the cavity. Its free border begins a little below the middle of the cribiform plate, and passes obliquely downward and backward, to a point immediately below the body of the sphenoid, where it ends. The middle concha is much bigger and extends from the posterior aperture to the atrium. The inferior concha is slightly longer than the middle, and is about midway between the middle concha and the floor of the nose.

The superior meatus is a short, narrow fissure between the superior and middle conchae. The posterior ethmoidal sinuses open into its upper and anterior part by one aperture, or, sometimes, by several apertures.

The middle meatus is a much more roomy passage than the superior meatus; it extends backward from the atrium, between the middle and inferior conchae. The upper and anterior part of the middle meatus leads into a funnel-shaped passage called the infundibulum, through which the frontal sinus communicates with the cavity of the nose. On the lateral wall of the middle meatus there is a deep, curved groove which begins at the infundibulum and runs from above downward and backward. The groove is termed the hiatus semilunaris, and in it there are the openings of the maxillary sinus and anterior ethmoidal sinuses. The upper boundary of the hiatus semilunaris is prominent and bulging. It is termed the bulla ethmoidalis. On or above the bulla there is the aperture of the middle ethmoidal sinuses.

The orifice by means of which the maxillary sinus communicates with the middle meatus is in the medial wall of the sinus near its roof and is seen in the posterior part of the hiatus as a slit-like cleft. Sometimes, however, there is a second orifice, situated lower down, and it opens into the middle meatus immediately above the middle point of the attached margin of the inferior concha. The space above and behind the superior concha is called the sphenoethmoidal recess.