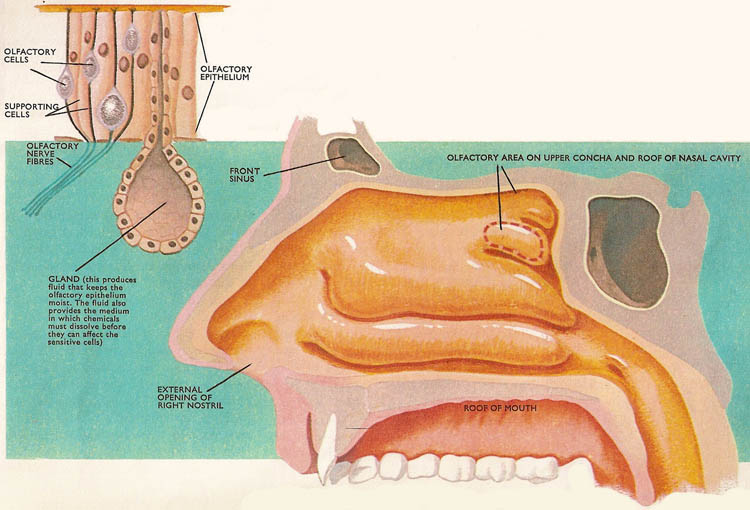 The right half of the nasal cavity viewed from inside showing part of the olfactory are. (Left) A diagram showing the olfactory receptors and their axons and their relationship with the surrounding cells.

Smell is one of the five traditional senses (though there are others); like the sense of taste it uses receptors called chemoreceptors which are sensitive to chemicals. The smell receptors, together with those for vision and hearing, form the distance receptor system. That is, they inform us of conditions at a distance. The sensitive cells are embedded in the epithelium (lining tissue) of the nose, on the roof of the nasal cavity, on the upper part of the wall that divides the nose into two halves, and on the upper fold (concha) in each half.

The olfactory (smell) cells are unique in that their axons pass to the central nervous system. (Generally, nerve processes grow out from the central nervous system.) They are surrounded by supporting cells and glands. The latter produce a yellowish-brown fluid which moistens the ends of the olfactory cells. The chemicals to which the receptors are sensitive dissolve in this fluid. Its continuous production washes away chemicals that have already stimulated the receptors and so leaves them clean and prepared for further substances. All the olfactory cells have the same structure yet we can appreciate a wide range of smells. Whereas there are relatively few taste receptors and few nerve fibers from them, there are many smell receptors and numerous nerve fibers carrying signals to the brain. Within the olfactory parts of the brain, which lie in the cerebrum, the nerve fibers interweave and connect up with others in a complicated way. Since each part of the olfactory lobe receives impulses from a variety of receptors because of the elaborate interconnections, a whole range of different smelling substances can be distinguished.