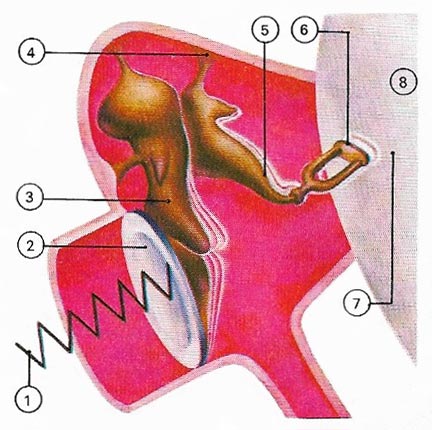 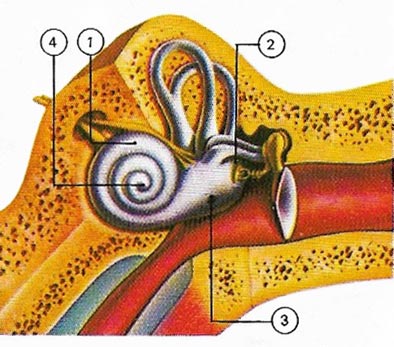 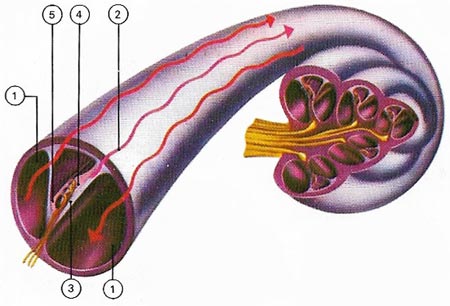 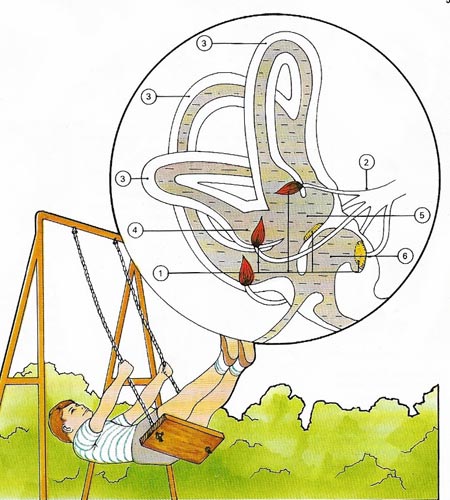 Fig 4. The inner contain five chambers filled with fluid – the three semicircular canals, the sacculus, and the utriculus. These all contain receptor cells (1) which monitor head movement and relay this information along nerves (2) to the brain. The semicircular canals (3) are set at right angles to each other and can therefore monitor angular movement of the head in any direction. At the base at each canal is a chamber, the ampulla (4), which contains sensory receptors. The utriculus (5) and the sacculus (6) are interconnected and also contain sensitive receptors. These register the position of the head with respect to gravity and thus allow us to know, even with our eyes closed, if we are standing on our head or our feet.

Fig 5. The position of the semicircular canals, the utriculus, and the sacculus are shown here (in red) in relation to the other parts of the ear. Balance also relies on vision, stimuli from the position sensors of limbs and on cells in the soles of the feet. In some cases, even when the inner ear is defective and not sending adequate signals to the brain, the other senses can maintain equilibrium.

Fig 6. (Left) Body movement is detected by the ampulla when fluid in the semicircular canals bends the hairs of its receptors. The canals are positioned in three planes, so that any movement will affect the fluid in at least one of them. (Right) The utriculus and sacculus contain hair cells which include small 'stones' of calcium carbonate, otoliths. When the head is upright, otoliths press on particular nerve receptors. When the head tilts, they press o others.

The ear is concerned with both hearing and balance. The visible ear flap or pinna, consisting of skin and cartilage, and the ear canal (auditory canal) that it guards are known in the outer ear. The canal is protected by hairs and modified sweat glands that secrete wax or cerumen. These trap potentially harmful particles or bacteria.

For protection the delicate mechanisms of the ear are set deep inside the bones of the skull. At the end of the ear canal lies the eardrum or tympanic membrane. On the other side is the cavity of the middle ear which communicates with the back of the throat through a canal known as the Eustachian tube. This opens onto the nose and throat and provides a complementary flow of air from the inside to match the pressure of air from the outside of the eardrum. This is most dramatically demonstrated if a sudden change in external air pressure – experienced, for instance, in aircraft – causes 'popping' of the ears and momentary deafness. Swallowing opens the tube and restores the balance. Another important function of the Eustachian tube is the replacement of oxygen used by the cells lining the middle ear.

Across the cavity of the middle ear, linking the eardrums with the inner ear, there are small bones, the malleus or hammer, the incus or anvil, and the stapes or stirrup, collectively known as the auditory ossicles (Fig 1). These, the smallest bones in the body, transmit the vibrations of the eardrum to a membrane, the oval window (fenestra vestibuli), that closes off the inner ear. Inside the inner ear is a fluid-filled coiled tube, resembling a snail's shell, called the cochlea (Fig 2). Here the vibrations are converted to nerve impulses that the brain perceives as sound.


How sound reaches the brain

Sound consists of waves of compression and rarefaction in the air. The intensity of the sound depends on the amplitude, or size of the waves, and the pitch depends on their frequency, or closeness together. Most people can detect sounds that have a frequency of between 20 and 20,000 Hz (cycles per second).

When sound waves reach the ear they pass down the ear canal until they arrive at the eardrum. The sound waves vibrate the eardrum and the vibrations are transmitted to the handle of the small bone in the middle ear known an the hammer (malleus). From the head of the hammer the vibrations pass to the anvil (incus) and then to the stirrup (stapes). The "sole plate" of this last bone fits across the small aperture in the wall of the bony labyrinth known as the oval window. The vibrations of the stapes thus pass through this aperture, along the fluid in the scala vestibuli of the cochlea, through the helicotrema and down the scala tympani to be dissipated through the fenestra tympani.

The fibers of the cochlear nerve are connected to the cortex of the auditory center in the superior temporal gyrus. Each fiber of the nerve serves only a short length of the organ of Corti, and is provided with its own particular area in the auditory cortex. Consequently a pure note, which causes vibration of only a few hair cells, is responsible for the excitation of only a small, though exclusive area of cortex. It is this association of each part of the organ of Corti with a particular area of the auditory cortex which makes possible the recognition of sounds of different pitch.

The areas of temporal cortex adjacent to the superior temporal gyrus are concerned with the memory of sounds and their association with the other senses and the emotions.

Human hearing extends from a frequency of about 20 Hz to 20,000 Hz. Some animals are able to generate sounds far beyond this range: the chart shows the frequencies generated by bats, porpoises, and grasshoppers, and for comparison the frequency-production ranges of birds and dogs. Musical instruments have two kinds of frequency-range: the range of notes that can be played (shown as a solid line) and the range of overtones that go to make up the characteristic sounds of the instrument (broken line). The ranges shown are those of the violin, the saxophone family (from bass to soprano), and the harp. For reference, the note middle C is marked in yellow.


The sense of balance

In addition to the cochlea, the inner ear also contains three fluid-filled canals, the semi-circular canals and two other chambers, the utriculus and sacculus (Fig 4 and 5). These structures, which function separately from the hearing mechanism, are concerned with balance and posture.

The three semi-circular canals are set at right angles to each other and are thus able to detect movements of the head in any particular plane. At the ends of the semicircular canals are chambers that contain tufts of hair supplied with nerve fibers. Any movement of the head sets the fluid swirling through one or more canals. This moves the hairs whose nerves tell the brain the body's position (Fig 6).

ACOUSTICS AND MUSIC
ANATOMY AND PHYSIOLOGY