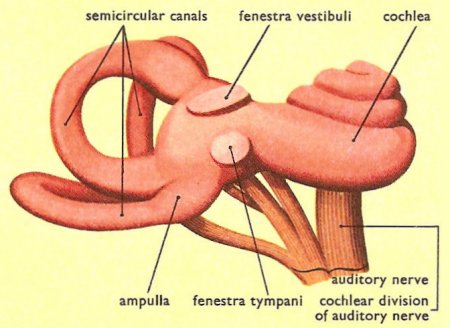 Arrangement of parts in the right bony labyrinth.

The bony labyrinth is the complex cavity of the inner ear. It consists of the central vestibule, the semicircular canals, and the cochlea. It is lined throughout by a membrane which, if it could be removed intact, would look like the accompanying diagram.

Inside the bony labyrinth lies an even more complicated membranous sac called the membranous labyrinth. Its various parts are called ducts, and there is one to occupy each semicircular canal, and another, the cochlear duct, to occupy part of the space in the cochlea.