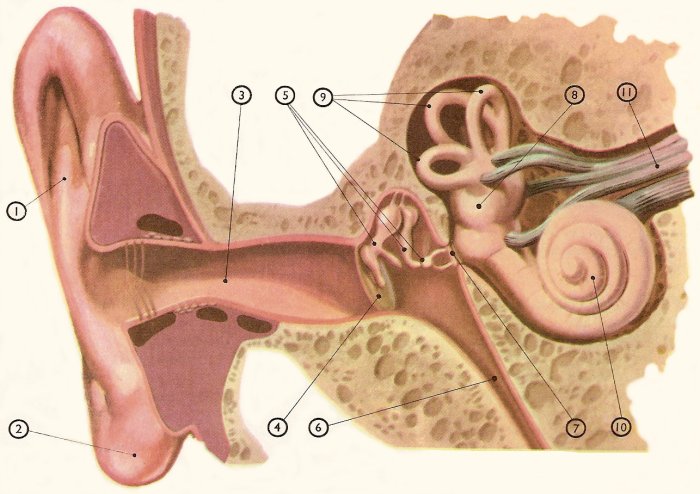 Main components of the human ear

1. The pinna is formed of cartilage covered with a layer of thin and flexible skin. In the human ear it is not particularly important and makes only a small contribution to the efficiency of hearing.
2. The lobe of the ear.
3. The external auditory meatus, or ear canal is about 2.5 cm (1 in) long. It is frequently contains a number of coarse hairs, and the glands in its walls secrete a waxy substance which dries and is sometimes shaken loose by the head's movements.
4.The tympanic membrane, or eardrum, stretches across the inner end of the external auditory meatus. In a healthy ear it is so thin that it is almost transparent.
5. The auditory ossicles are called the hammer, the anvil, and the stirrup, because they look rather like these objects. You can see from the illustration above how the handle of the hammer is attached to the tympanic membrane, and how the base of the stirrup is attached to the opening called the fenetra ovale, or oval window. The anvil joins the top parts of these two bones together. When a sound reaches the ear, the ear drum vibrates and this movement is transmitted through the bones to the oval window. An interesting point is that the bones are arranged so that quite small movements of the eardrum cause much larger movements of the oval window.
6. The Eustachian tube connects the cavity of the middle ear with that of the pharynx (the cavity behind the nose, mouth, and the larynx). Its function is to allow air to pass in and out of the middle ear and so to keep it at the same pressure as the atmosphere outside. Unless the pressures on both sides of the membrane are the same it cannot function properly.
7. The fenestra ovule, or oval window, occupies the little gap in the bone between the middle and inner ears. It is filled completely by the base of the stirrup and the small ligament surrounding it.
8. The utricle and sacculus are the middle parts of the membranous sac of the middle ear. They lie in a part of the bony labyrinth called the vestibule. Inside these two organs are little ridges of tissue which change positions as the head is tilted. Nerve impulses keep the brain informed about the position of the head.
9. The semicircular canals lie at the back of the bony labyrinth. In order to show them clearly in the illustration some of the bone of the labyrinth has been left out. The semicircular canals are filled with a fluid called endolymph. When the head moves, the fluid in at least one of the canals lags behind a little and the pressure brought about by this lag causes nerve messages to be sent to the brain. From these messages the brain can tell which way and how fast the head is being moved.
10. The cochlea is so named because of its likeness to a snail (the Latin cochlea means "snail"). Its wider part is in contact with the oval window, and when the base of the stirrup moves in and out the endolymph in the cochlea moves too. As a result some of the little hairs within the cochlea vibrate. From the bases of these hairs nerve impulses go along the auditory nerve (11) to the brain, which integrates the intensity and pitch of the sound that is being received.

The ear is the sense organ that in vertebrates detects sound and helps maintain balance. The visible portion of the ear, called the auricle, pinna, or ear flap, is part of the outer ear. Together, the outer ear and the middle ear collect sound and transmit it to the inner ear which contains the organs of (except in fish) hearing and balance.

The only parts of the human ear one usually sees are the pinna and the outer end of the external auditory meatus, or ear canal. All the other parts of the ear lie hidden in a series of little chambers hollowed out of the temporal bone at the inner end of the meatus. In this way the delicate structures are protected from injury, while at the same time being able to receive sound waves from the outside.

Anatomists usually think of the ear as bring formed of three parts, the outer, middle, and inner ears. The outer ear consists of the pinna and the external auditory meatus. The function of the meatus is to collect sound waves and channel them to the tympanic membrane, or eardrum, at its inner end.

The middle ear is a tiny chamber which contains the three little bones of the ear, the auditory ossicles. These bones are so arranged that they transmit the vibrations of the eardrum to the actual organ of hearing, the cochlea, in the inner ear.

The inner ear consists of several intercommunicating membranous sacs. These fit snugly into cavities in the temporal bone, which are so complex in form that they are called the bony labyrinth. The sacs are delicate sensory organs which not only enable us to hear but also give information about the position and movements of the head.