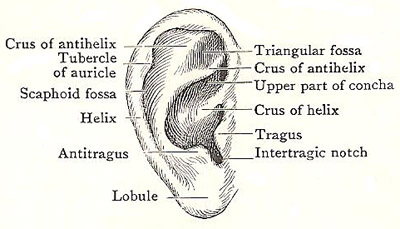 The auricle, also known as the pinna, is the external flap of the ear. The term was also once used as a synonym for the atrium (one of the two upper chambers of the heart). Ear-like appendages of the atria are still called auricles.

The auricle consists of a thin plate of yellow fibrocartilage covered with skin. It is fixed in position by certain ligaments, and possesses two sets of weak muscles – an extrinsic group, passing to the cartilage from the epicranial aponeurosis and the mastoid process (see mastoid bone), and an intrinsic group, attached to the cartilage alone.

The auricular cartilage extends throughout the entire auricle with the exception of the lobule and the part between the tragus and the helix. Those parts are composed of fibrous tissue enclosed in skin. The cartilage is continuous with the cartilage that forms the wall of the lateral part of ear canal (external auditory meatus). That cartilage is firmly fixed by fibrous tissue to the end of the bony part of the meatus; but it does not form a complete tube, being deficient above and in front; that part of the tube is completed by tough fibrous tissue which stretches between the tragus and the commencement of the helix.


Blood vessels and nerves of the auricle

The blood vessels of the auricle are small branches and tributaries of neighboring arteries and veins. Branches of the facial nerve supply the muscles. The great auricular nerve supplies the skin of the lower third of the lateral surface and the lower two-thirds of the medial surface. The auriculo-temporal supplies the rest of the lateral surface, and the lesser occipital the rest of the medial surface.


Muscles of the auricle

The auricularis anterior and the articularis superior, which arise from the epicranial aponeurosis, are as a rule poorly developed. The auricularis posterior is a more definite bundle, which arises from the mastoid temporal bone above the root of the mastoid process. They are all inserted into the root of the auricle, and have a feeble power of moving it which, however, may be cultivated by practice.