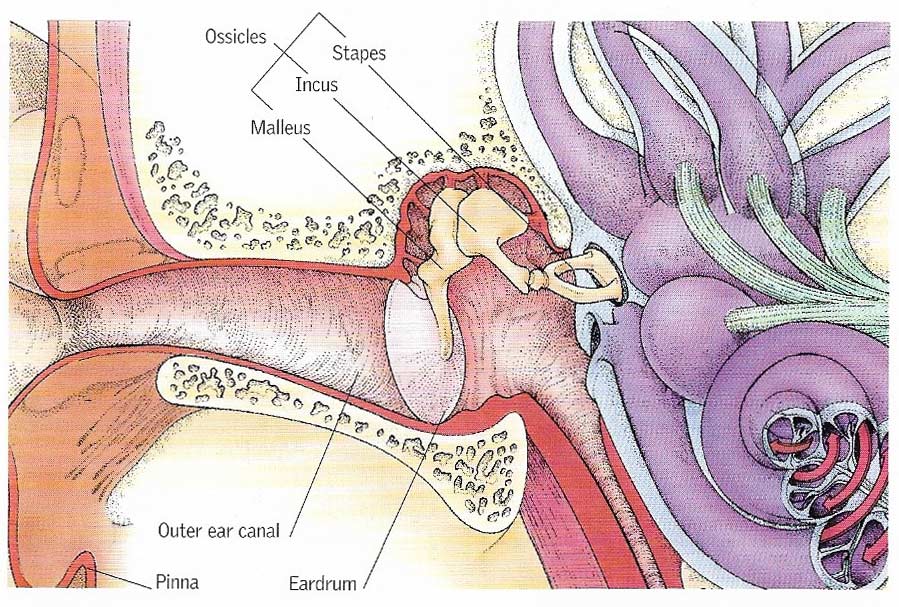 The ear ossicles, also known as the auditory ossicles, are tiny bones in the middle ear of vertebrates, which connect the eardrum to the inner ear. They transmit vibrations of the eardrum caused by sound waves in the air to the fluid of the inner ear via the oval window. Three ossicles, the malleus (hammer), incus (anvil), and stapes (stirrup), are present in the mammalian ear. They form a lever system, diminishing the force of sound waves and increasing the force on the inner ear. A single ossicle occurs in the ear of birds, amphibians, and reptiles.


Anatomy of the human auditory ossicles

The incus has a large body and two processes. The body is rounded and compressed laterally. It lies within the epitympanic recess and articulates anteriorly with the head of the malleus. The long process descends behind and parallel to the handle of the malleus. Its lower end bends medially and articulates with the head of the stapes. Its shadow on the tympanic membrane can sometimes be recognized on otoscopic examination. The short process projects backward and is attached to the posterior wall of the tympanic cavity by a ligament.

The stapes has a head, a neck, two limbs, and a base. The head is small and articulates with the long process of the incus. The neck is narrow and receives the insertion of the stapedius muscle. The two limbs diverge from the neck and are attached to the oval base. The edge of the base is attached to the margin of the fenestra vestibuli by a ring of fibrous tissue, the annular ligament.