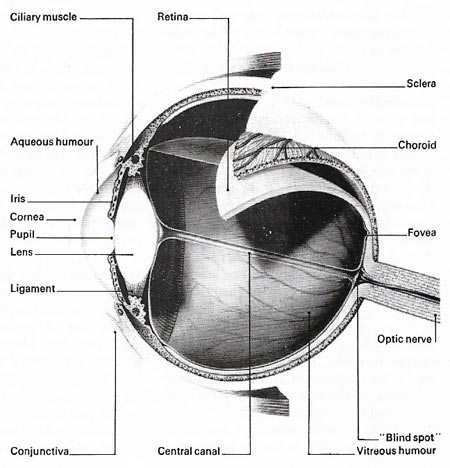 Fig 1. Section through the human eye. 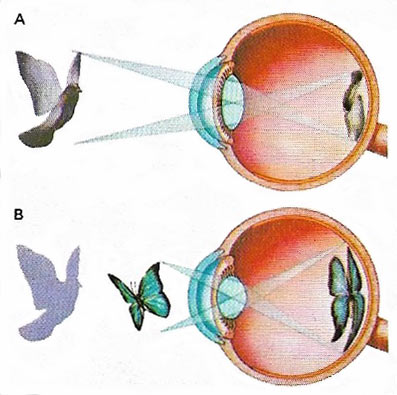 Fig 2. Focusing of light rays from distant objects (A) is mainly done by the cornea with little help from the lens. Ciliary muscles encircling the lens relax and stretch ligaments, which pull the lens flat. Rays from a near object (B) are bent by a thick lens produced when the ligaments slacken as the ciliary muscles contract. This process, which is called accommodation, is essential for sharp focusing. 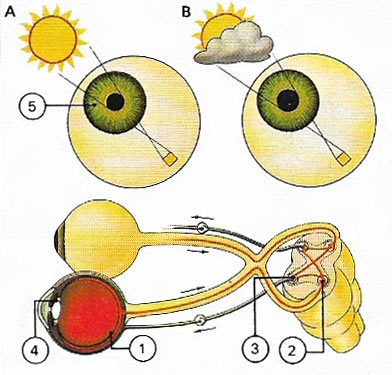 Fig 3. Pupil size changes according to the amount of light. In bright conditions (A) light striking the cells of the retina (1) stimulates impulses to the brain stem (2) and brain centers (3), which causes the pupillary muscles (4) to contract. Radial muscles (5) also stretch and the pupil closes by reflex action to protect the delicate retina. In dull light (B) the muscles contract less, thus allowing more light through the pupil. 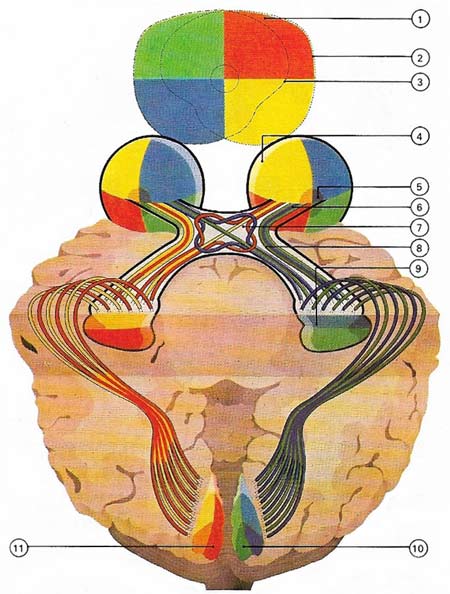 Fig 4. The visual field (1) is divided here into four colors. That of each eye (dotted lines) is dissimilar bot overlaps (2, 3). The image from the side is indistinct (4) as it falls on the edges of the retina. The clearest image is formed at the fovea (5). Information is taken from the retina is taken by the optic nerve fibers (6) to the chiasma (7) where crossing over takes place. The fibers leave the chiasma and form the optic tract (8), which divides into the lateral geniculate body (9). The visual cortex in the right hemisphere (10) receives information from the right side of each eye (the left side of the visual field), and the left hemisphere (11) receives information from the left side of each eye (the right side of the visual field).

Vision is the sense concerned with reception and interpretation of light stimuli reaching the eye; it is the principal sense in humans. Light reaches the cornea and then passes through this, and also the aqueous humor, the lens, and the vitreous humor, before impinging on the retina. Here there are two basic types of receptor: rod cells, concerned with light and dark distinction, and cone cells, with three subtypes corresponding to three primary visual colors: red, green, and blue. Much of vision and most of the cones are located in the central region, the macula, of which the fovea is the central portion; gaze directed at objects brings their images into this area. When receptor cells are stimulated. Nerve impulses pass through two nerve cell relays in the retina before passing back toward the brain in the optic nerve.

Behind the eyes, information derived from left and right visual fields of either eye is collected together and passes back to the opposite hemisphere of the cerebrum, which it reaches after one further relay. In the cortex are several areas concerned with visual perception and related phenomena. The basic receptor information is coded by nerve interconnections at the various relays in such a way that information about spatial interrelationships is derived with increasing specificity as higher levels are reached. Interference with any of the levels of the visual pathway may lead to visual symptoms and potentially to blindness.


Anatomy of the eye

Some parts of the eye are directly involved with receiving light, whereas others protect delicate structures (Fig 1). The protective elements include the eyelids, which are fringed with eyelashes – coarse, dust-collecting hairs. The eyebrows, above the lids, may help prevent sweat from running into the eyes. Lining each lid is the conjunctiva, a transparent membrane that loops back to cover the front of the eye. Its low-friction surfaces help the lids to open and close easily and, more importantly, protect the front of the eye. Under the eyelids are the lacrimal, or tear-producing, glands. Tears, which wash away foreign particles and kill bacteria, are continually secreted on to the conjunctiva through 12 ducts and are normally removed through two canals in the nasal corner of each eye.

The outer coating of the eyeball is the sclera, the tough, fibrous white of the eye. The sclera provides attachment for the six extrinsic muscles that move the eyeball, maintains eyeball shape and guards delicate inner layers. At the front it is transparent, to allow the entry of light. This is called the cornea and is the most important part of the eye for giving the focussed image.

The central canal joins the lens in the blindspot; it is essential in pre-natal development, when it carries blood to the lens. Lining the inside of the eyeball is the choroid. Towards the front of the eye the choroid becomes the ciliary body. The muscles of the ciliary body also suspend and alter the shape of the lens, a tough biconvex structure made of an elastic capsule filled with fibrous tissue that adjusts the focussing or accommodates (Fig 2). By muscular contraction the lens is made thicker for near vision to give maximum focusing power and is thinnest when a distant object is being viewed.

The lens lies behind the iris, a colored, muscular continuation of the choroid which, according to inherited characteristics, gives the eye its color. The pupil, a circular opening in the iris, controls the entry of light, for it can change in diameter, by reflex action, from 1 to 8 mm (0.04–0.32 in.) (Fig 3). The pupil is smallest in bright light, largest in dim light. It closes down for near vision, increasing the depth of field and in some conditions increase sharpness of vision (acuity).

After penetrating the lens light passes through the vitreous humor, the clear jelly filing the eyeball behind the lens. It then falls on the retina which contains light-sensitive photoreceptor cells, the rods and cones.

The rods and cones contain visual pigments whose structure is altered by light. As a result nerve impulses are generated which pass to the brain for interpretation as vision. The pigment in the rods is called visual purple or rhodopsin, and light splits it into retinene and opsin. The cones are of three kinds – 'red', 'green', and 'blue' – and respond to light of those colors. The broad range of tints that we perceive results from mixing of the three primary colors (see Figure 4). The cones provide precise vision in daytime, but are of little use at night or in dim light.

Both the rods and cones are connected with ganglion cells and these give rise to one million nerve fibers which leave the eye at the optic nerve. At this junction, the blind spot, the eye detects nothing. The nerves from each eye lead, after 'relay' stations, to the occipital lobe of the cerebral cortex at the back of the brain. Optic nerve fibers are so arranged that impulses from the left side of the visual field of each eye travel to the right side of the brain and vice versa. Crossing over takes place at the optic chiasma situated behind the eyes. Information from each eye is combined by the brain to create stereoscopic vision.

Eye movements are vital for perception. The eyes follow moving objects smoothly, butmove to saccadic jerks to select regions of interest and to prevent adaptation of the receptors by continuous stimulation.


The process of perception

Vision results from the stimulation o nerve cells in the retina, signalling patterns of light intensity and color, which are decoded by the brain to give perceptions of separate objects. The most remarkable feature of perception is its ability to convert continuous patterns of energy at the receptors into individual objects and events, in space and time, all from the same kinds of pulses of electricity running along nerve fibers.

Edges – contours – are very important to perception. Orientations of contours stimulate 'feature detectors' in the striatic cortex. Orientations, angles, and movement are represented separately, by feature detectors tuned to these characteristics. Combinations of these signalled characteristics are then put together to form our perceptions of objects. This also requires a great deal of experience, stored in the memory.